The firstborn Blending is a bit of a mess, but that’s to be expected. I had just seized upon this plan in less time than it probably took you to read the last two blog posts, and I had to get my feet treadling. But first, I wanted to clear my bobbin a bit.

I had already spun some of the pink into a thickish single, in my usual manner of letting my hands do whatever the fiber seemed to be asking it. Soon I would start bossing my fiber around, but for this first ply, I thought I’d just play with color first, and spin a second ply to loosely match what I already had.

I didn’t really know how much was on the bobbin, but I knew I wanted my mini-skeins to weigh around half an ounce. So for a second ply, I weighed out a scant .3 oz of nests. I liked the idea of putting a bit of pink in the mix, so the final yarn wouldn’t barber-pole. To that, I added the closest thing I had to a compliment of similar value, to see what would happen (the light teal), and a beige just because.

I ran the three pencil rovings through my hands, then pre-drafted them slightly, to make them into a unified thingy that would be easier to draft. Then I spun it up in a fairly laxidaisical fashion.

Color notes: Now, each one of these “solids” is already a heather made of many other shades. I realized very quickly that the main ingredients originally blended to make the beige were probably that very pink and teal. Really, I was mixing beige and beige, which looked like a sort of floral dogs breakfast. Plied together with the plain pink, though, it just looks “earthy.” 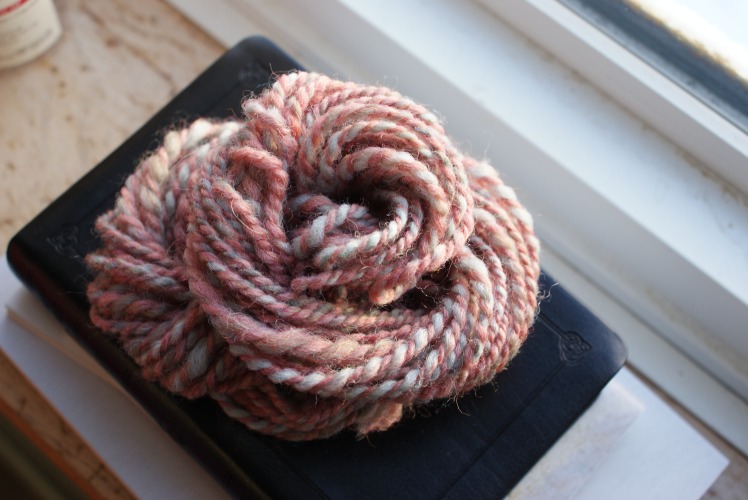 As predicted, it turned out pretty artsy and uneven. I purposely overplied it, knowing I had underspun it, but guys, I am just done with underplied yarn. I want to start making 2-ply yarn with that pretty beaded look that always makes me fall in love with handspun. Therefore, also as predicted, it was a bit of a mess off the niddy noddy, but it evened out in the wash a lot more than I expected.

Spinning notes: As I said, I hadn’t paid much attention when I spun the first ply months ago, so I didn’t pay much attention here. I think my default drafting style is kinda semi-woolen-when-I-can, with pinch support with my left hand when I need more control. As a result, this is pretty chubby stuff, but not too dense. 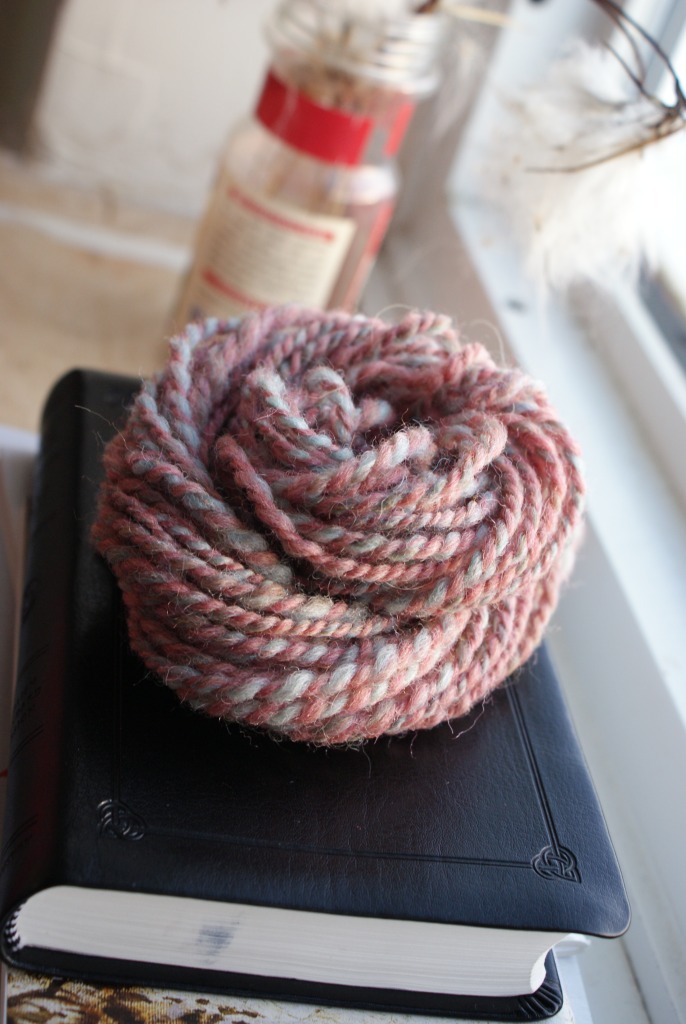 One thought on “The First Blendling: Chubby Pink”