Wasn’t that fun? I really enjoyed doing a series of short posts on a theme. As a reader, I find series more engaging and fun to read, and as a writer, it spreads the workload of what would have been one long ridicu-post. I will look for more opportunities to do that in the future.

Meanwhile on my needles, fuzzy things continue to grow. I’ve been hit with a lot of knitting inspiration lately, from reading more blogs to poring over my pattern books to updating my stash. Last week I managed to channel some of that passion onto the actual needles. 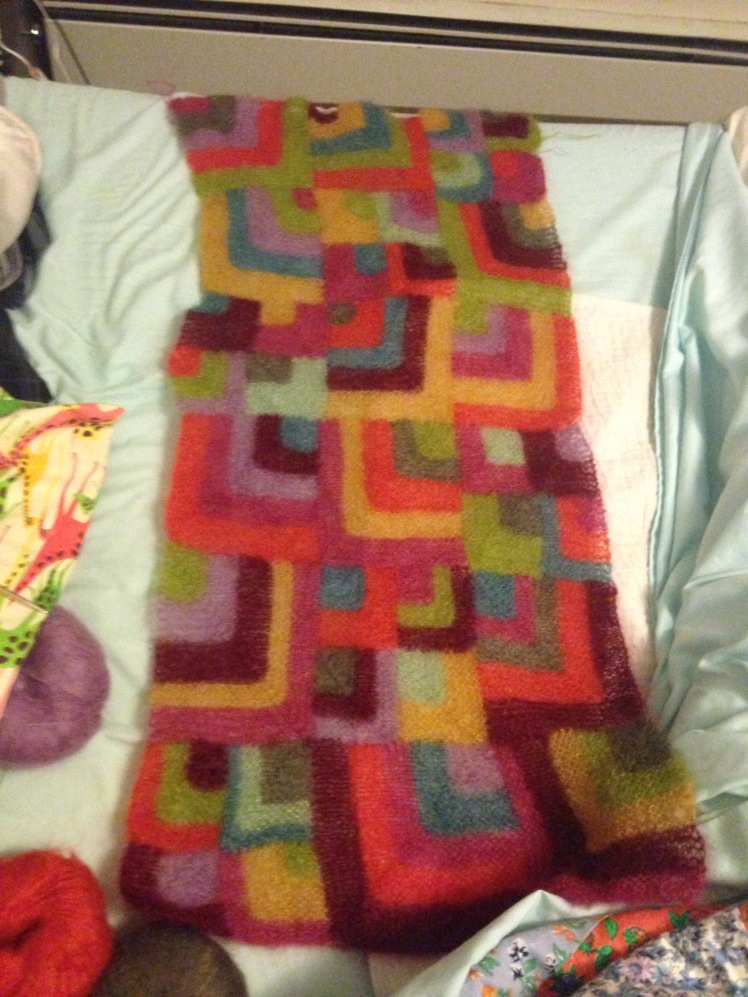 Check it out! That’s repeat number six of the mitered monster-halfway done. I was on a tear, and since my next day was a day off, I set my mind to doing the next row of squares in a day.

That was when I learned that you should at least check your work twice when staying up that late.

I mean, wow. My favorite part is how I didn’t even notice what had happened until the square was completely finished and I was trying to pick up for the next one.

I considered leaving it, and adding one more sort of rectangle stripe, but that would have been way too noticeable, even to my incredibly non-perfectionistic knitting approach. The consolation was that it was much faster to knit the second time, what with all the colors pre-cut to the right lengths and wrapped on one ball. No checking the pattern and hunting for the right color every ten tiny rows.

Somehow, between naptime and letting the kids watch a little extra TV, I still managed the seventh row of squares in 24 hours. (Yes, sometimes I sacrifice good parenting for the sake of sanity. I think of it as a long-run investment in all of our mental health. It’s also January.) I think you can see the graded rainbow-ish effect start to play out; the most red is on the right end, more orange and yellow in the middle, and green is taking over on the left end, which is the most recent. With five rows to go, I’ll finally start seeing more of the cooler colors.

(Sorry for the horrible phone photos. They let me get the blogging done. I am getting a lot of blogging done while lying in bed nursing a demanding teething sleeping toddler, even though it’s doing strange things to my joints to hold my phone at that angle.)

It’s funny: lots of color changes are what make this shawl fun, both to knit and to look at, but they are also the most annoying thing about it. At least I’ve worked out how to weave in nearly all the ends in as I go, so I only have six ends to weave in at the end of a row of squares instead of 40. That’s not an exaggeration. There are literally 20 color changes in a row of squares, and you have to weave in both ends.

I am still enjoying this shawl, though, especially now that I’m using needles I like.

Tomorrow: the fuzzies have multiplied.