It’s the sixth day of Christmas, which brings us, palindrome-like, to the number seven. (Not doing backwards like this again; too confusing.) Seven is the number of balls of Knitpicks “Dishie” that arrived in the post in October.

I like to make a little something, see, for all the lovely women in my life. And at one of their homes, I had seen the regular and devoted use of an actual knitted dishcloth. She actually goes to craft shows and buys them. So I thought, I could do my own version: Northern Style.

I acquired the colors, decided on a size, made a couple of charts, and they began appearing.

It took nearly a month to generate fourteen of the things. I reflected, somewhere around number eight, that I had signed myself up to knit enough to make a sweater and a half out of dishcloth cotton. To put it mildly, I don’t really enjoy working with dishcloth cotton, so it’s good I didn’t think about this until I was committed, or I would have balked. As it was, I grit my teeth and kept making dishcloths. I love these ladies a lot.

As to northernizing them: it’s a habit with knitters to put pictures of things on dishcloths. (I borrowed the size of dishcloth, for example, from this one of a this one that is supposed to be a witch but looks awfully like a dalek.) The Inuksuk is a northern symbol that I thought particularly knit-able.

Having settled that, I wanted a particular inuksuk to copy. I started with the one on the Flag of Nunavut. 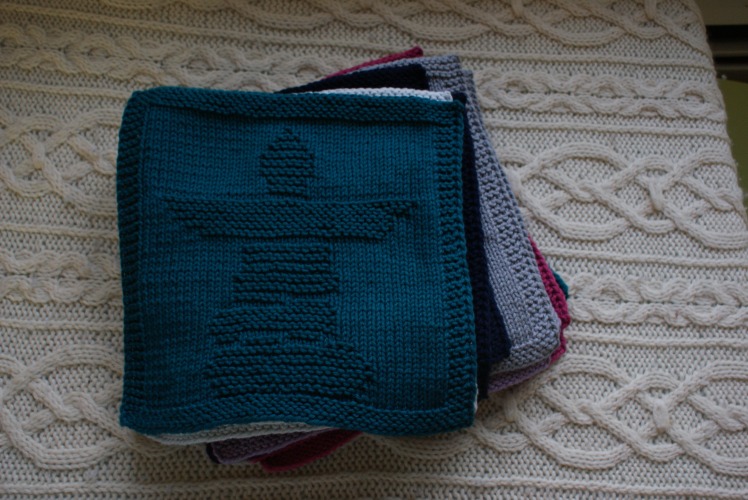 But the dishcloths would come in pairs, so I wanted a second. I settled on this one, which is in Rankin Inlet.

I then had the delightful task of pairing them into little packages and wrapping them up with love and a lace, and assigning each pairing to the friend whose personality (or kitchen colors) seemed to match them the best.

I hope they don’t feel less loved for their gifts being part of a set, for having companions somewhere in the hemisphere, washing their dishes with a coordinating pair of rocky images.

Halfway through the Christmas season already. If this post seems a little half-baked, I’m trying to type it while keeping two toddlers interested in Bedknobs and Broomsticks. So far they think the most interesting part of the movie is the candles. It’s been a fabulous sort of staycation this week, but we’re all about ready to get back to the regular work week.

How about you? What sort of practicality do you enjoy making beautiful for the people you care about?