The race to the Olympic finish was something else. I paced myself carefully those last few days, pulling a couple very late nights to meet a benchmark for the day. The real risk, at the very end, was running out of dark brown. I had decided to do the full length on the bottom hem, hoping it would anchor the piece below all that green, and that meant I didn’t have enough for the shawl collar. That collar is something else – it looks really simple, but it’s this complicated layering of short rows. I changed those short rows on the fly, while incorporating buttonholes (the pattern has no buttons, and I wanted some). I eked out just enough rows to look like a solid collar to me before the brown ran out. That was dinnertime on Sunday. I had only the bindoff to go.

My critical error was one of time zones. The Ravellenics officially ended at midnight – but midnight Rio Time. That’s 11 p.m. EST. I had a relaxed after-dinner routine, and only realized my mistake when I sat down. It was 8:30, and I had two and a half hours.

But it was just a bind-off, right? How do you need three hours to do a bind-off?

Well, my friends, this is the most epic bind-off ever. It’s an i-cord bind-off, around a long shawl collar and a wide hem, which included a crazy 3-needle-i-cord-bind-off to attach the bottom of the pockets. And let’s not forget, I was working in ancient breaky boucle. 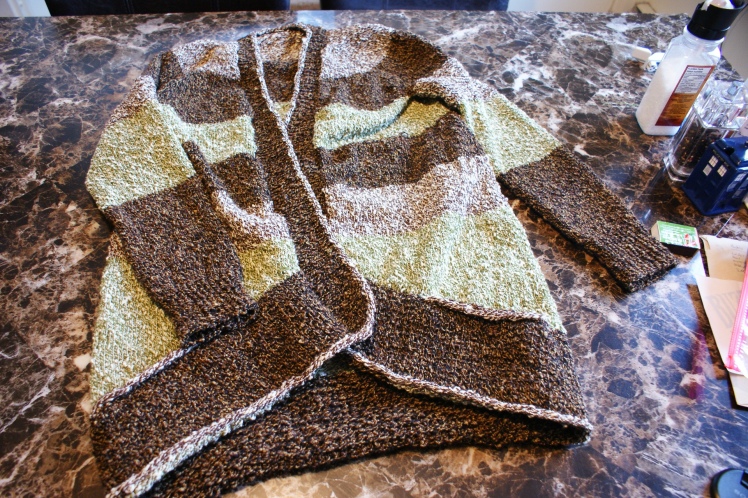 Twenty-six minutes, after a two and a half week marathon! After all that careful pacing! If I had done just one thing different – if I had stayed up one more late night, if I had skipped one blog about my progress, if I had ignored my children just a little bit more – Okay, fine. Putting it that way, I have no regrets.

Additionally, I had a nice excuse to start a commiseration party on Ravelry for the several knitters who found themselves in the same boat. I called it “The 4th Place Saloon.” I even met one knitter there who had done the same thing as me: devoted herself to one sweater project, had it all paced out, but missed making it by less than an hour because she forgot the time difference. Her excuse? She did an actual triathlon during the games. Talk about no regrets!

The mods had mercy on my case, however. They declared my time change mistake a sort of “injury,” an unforeseen circumstance, so to speak, and called me up to the podium with the rest of the finishers. So with their blessing, I humbly accept this medal.

A new addition to the Ravellenics was having “laurels” for different techniques. My sweater, being fairly simple, didn’t qualify for many, but there’s one that I accepted with honors: 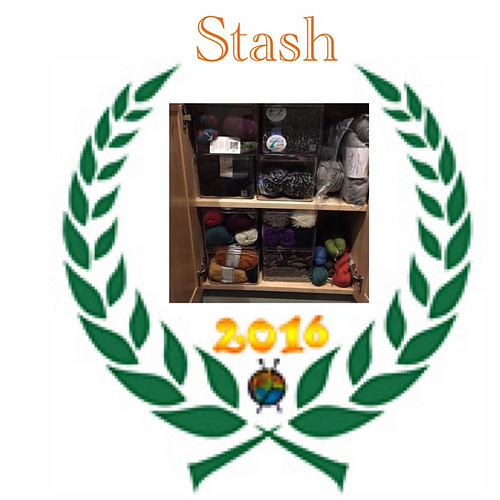 The requirement to qualify for a “Stash Laurel” is that the yarn had to be in your stash for at least 6 months. Yarn that was in my stash for a year and a half after being inherited from a friend’s stash where it sat for literally longer than my lifetime? I think I might have set a record! You know your 100% wool yarn is old when you go to block it, and instead of smelling of wet sheep, it smells of basement.

The buttons, I should add, were sent to me by my college professor Mary Stewart Van Leeuwen, when I wasn’t sure what buttons to put on my last sweater. She rescued them off one of her old sweaters. This was quite the cobbling together of old treasures.

I felt like I was knitting more just the earthy colors I always like; I was knitting a little bit of this glorious Arctic summer. We had absolutely incredible weather for the week that Jared’s parents were in town. Olympics or no Olympics, we were going out on the tundra to enjoy weather in the teens (C), sunshine, and berry picking. Not to mention Naomi’s favorite sport: toddler bouldering. 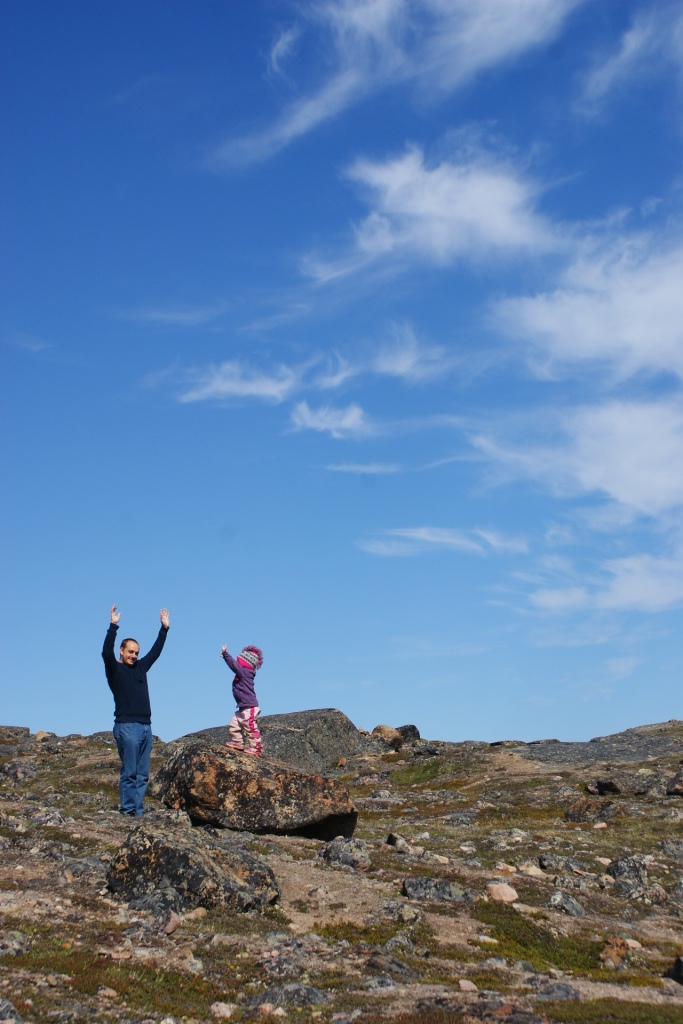 I was hoping for some of that weather to take pictures of my Ravellenic sweater. When I bound off, I had visions of myself out on the windswept tundra, looking rustic yet feminine, glorying in the mossy greens and mottled rocks that matched the marled fabric.

But by the time Brownsands was finished blocking, the gorgeous weather had been replaced by an anticipation of October’s Gloom. For a week it’s been cloudy and rainy and cold. Today it was sunny again, but so windy that my children threatened to blow away during the 10 seconds we were outside.

So instead we had to settle for some blurry rushed pictures in my living room. I’ll juxtapose some pictures of the great outdoors near my house, and you can use your imagination. 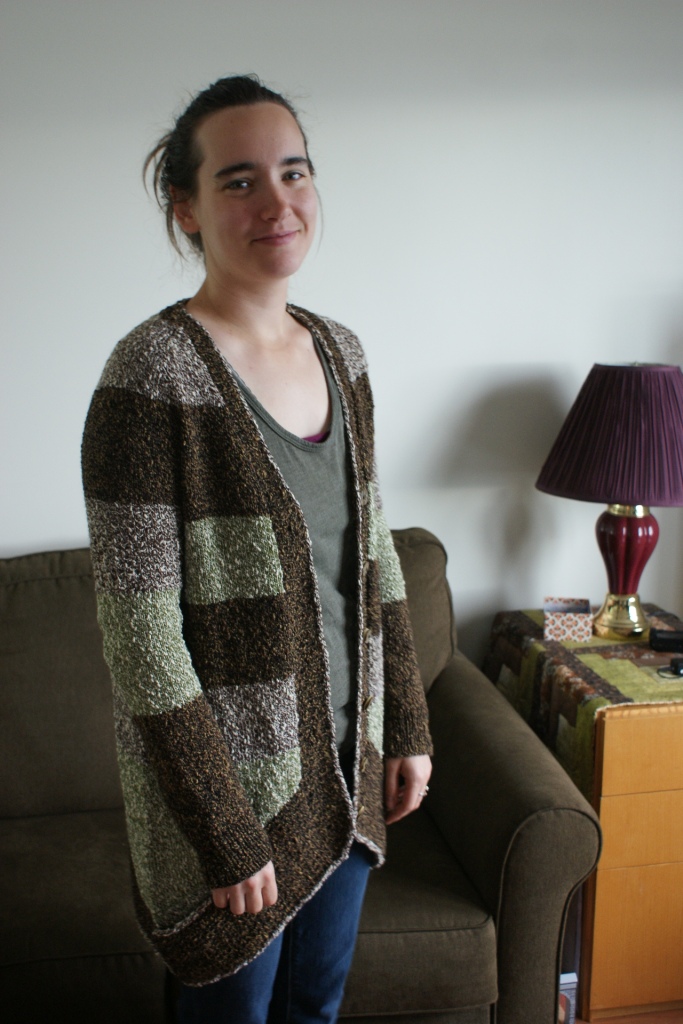 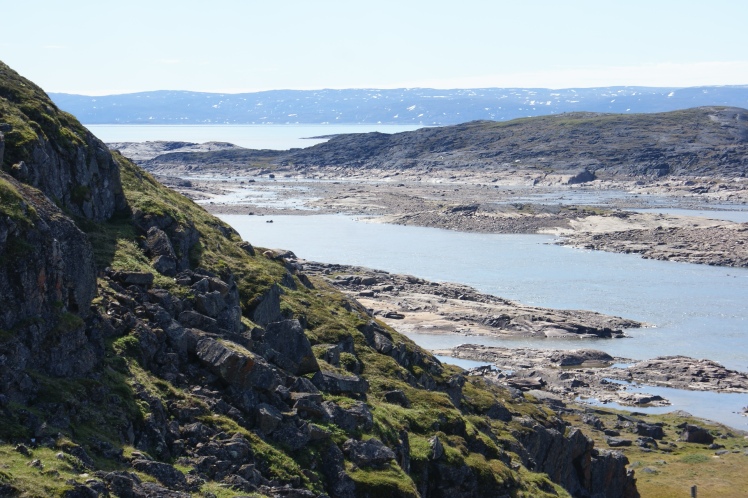 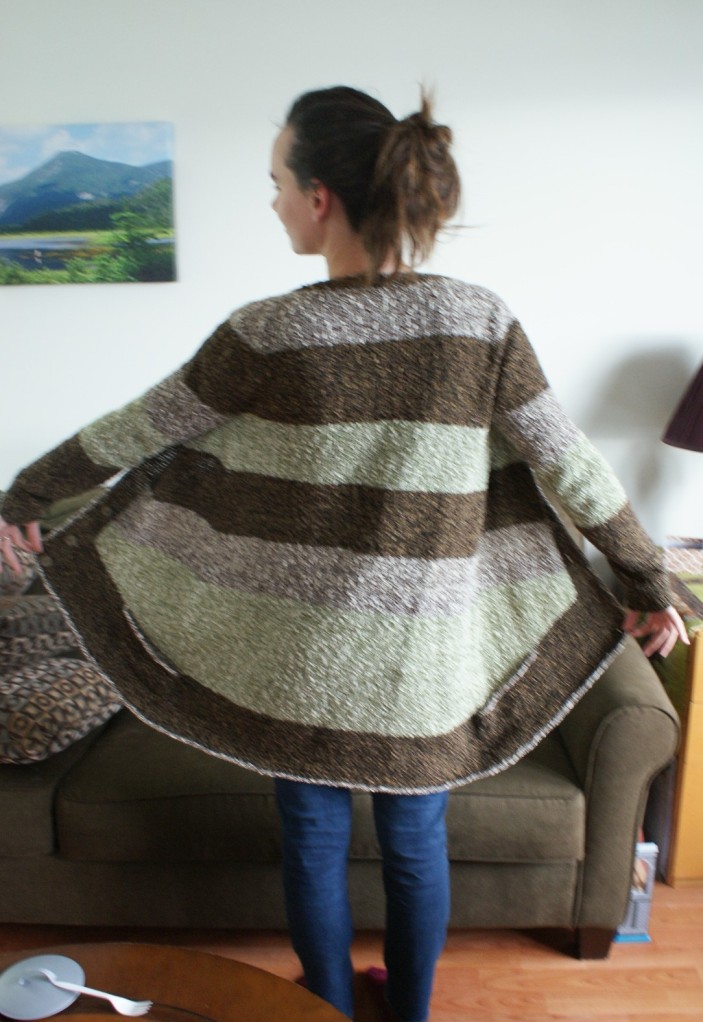 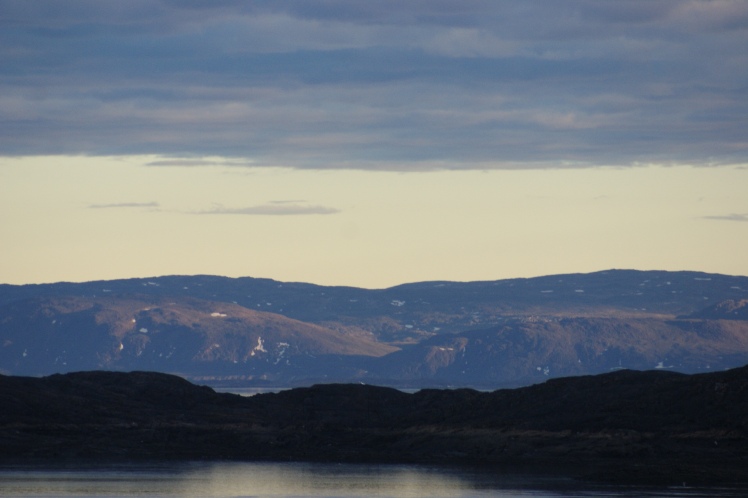 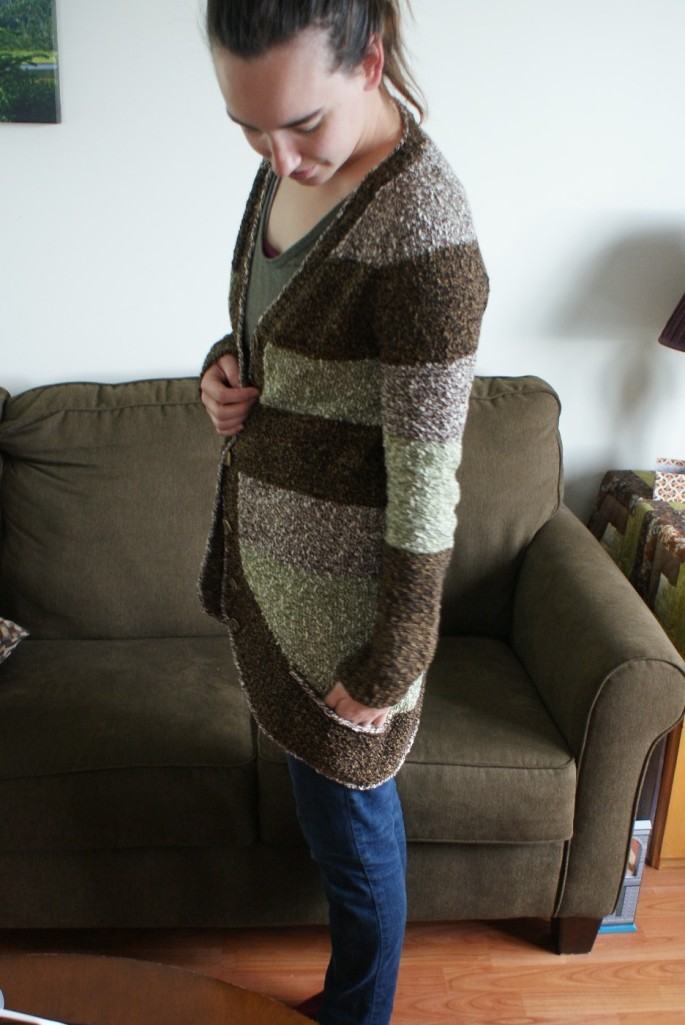 Pattern Review: The BlueSand Cardigan is pretty great. It’s expensive for a single pattern, but it comes with two yoke options, so it’s sort of like getting two. I did the combination yoke, and despite my perennially short row gauge messing with the carefully laid plans of the designer, I think the subtle shoulder sloping was achieved. At least, it feels like it fits right. I love the fit, and the stripes, and silhouette, so I’d love to try it again with raglan shaping, smooth yarn, and the original color distribution.

That said, I think my color adaptation worked really well. All that green at the bottom is a little heavy, but I love the way the contrasting I-cord at the top of the pocket has a framing effect with the I-cord around the outside.

Yarn Review: There’s not much point in reviewing decades old yarn. But I want to talk about this yarn experience. So let’s just call it that: a Yarn Experience. Because it was an experience, knitting a large sweater out of really old DK-weight boucle. The saving grace of this yarn is that it was 100% wool, because some of it was so old and fragile that I was running into a broken ply every few feet. A lot of spit went into this sweater, in the form of spit-splicing.

Boucle is… well, it’s fun to spin, but no one knits with boucle on purpose any more. After making this, I imagine it’s because it makes a really busy-looking fabric. However, it worked in a mostly-stockinette sweater, and amazingly, I didn’t spend the whole time going mad splitting the yarn with my needle. (I was too busy going mad with all the spit-splicing, I guess.)

I fulled it slightly to secure any missed breaks in the yarn, and blocking turned the crunchy fabric surprisingly drapey. If that sounds appealing to you on balance, you can still find lots of this stuff on Ebay (Templeton’s Knop Scotch, if you really want to search for it). 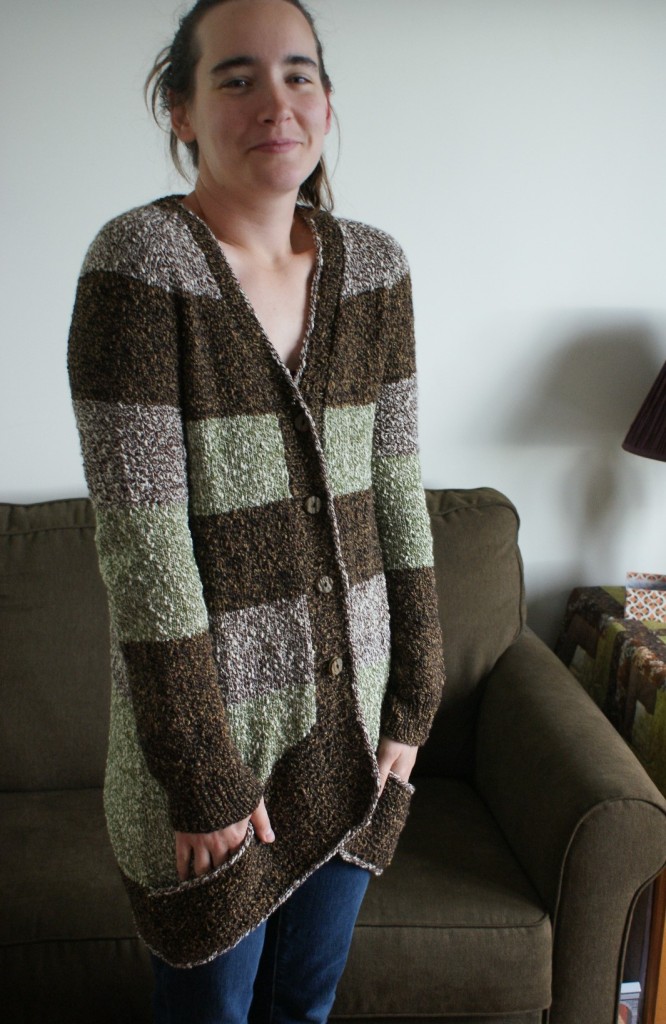 And one more imagined bit of scenery for you to imagine me standing on, looking bravely into the distance: 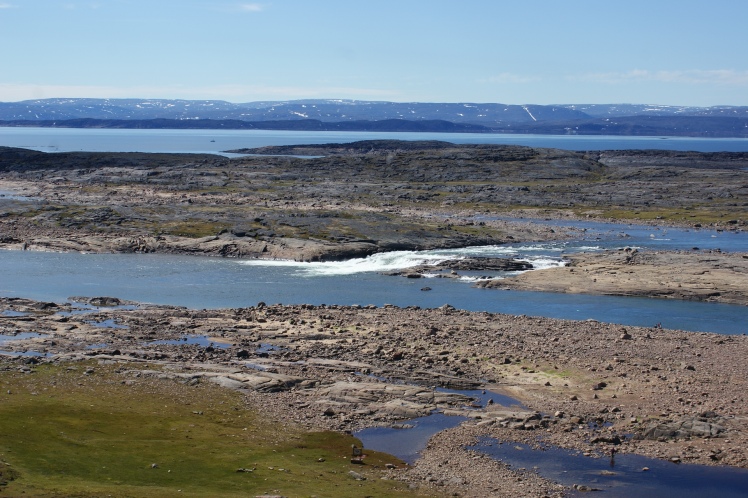 Peace out, Team Canada. The Rio Olympics is in the books, and I’m thankful for the journey.

2 thoughts on “BrownSands and Ravellenic Gold”