And now we give you a recap of the first three days of the Sweater Triathlon here at the Ravellenic Games. With us are star commentators Meg Swanson and Stephanie Pearl-McPhee. They’ll be following the progress of one of Team Canada’s newest members. Over to you, Meg.

M: Thanks Ron. We’re here following Rebecca Osborn, new to Team Canada, but entering the Sweater Triathlon with a lot of experience. She chose a challenging pattern with some unusual shaping, and an unforgiving yarn, so she must have a lot of confidence going into this year’s competition.

S: She had a promising start during the opening ceremonies, hesitated a little bit on those initial increases, but found a groove that put her in good shape for a stellar first day. 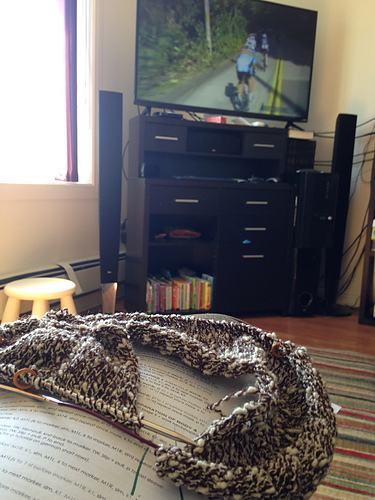 M: I would agree with that, Steph. Her goal was to power through that complicated yoke over the weekend, and it looked like she was going to make it before she ran into that first snag. 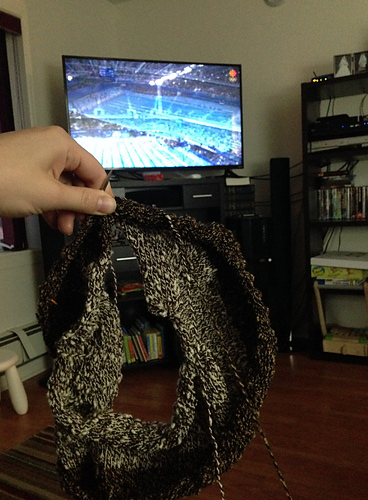 M: This is supposed to be the finished yoke after day 1. Looks a little short, don’t you think Steph?

S: Definitely short, Meg. There’s no way that’s deep enough to install the armholes. See, in training, knitters are supposed to swatch carefully – meaning knit a test piece – to make sure their number of stitches per inch, which is the width of their stitches, and rows per inch, which is the height of their stitches, perfectly match what’s designated in the pattern. That’s the only way to make sure the finished garment fits right. That advance swatching is supposed to make sure they don’t run into problems like this.

M: I was sure Osborn swatched last week, Steph.

S: She did, but my only guess is that she either didn’t measure or discounted her row gauge. We’ve seen trouble in her row gauge before, Meg, so it was a big mistake to ignore that measurement this time around. 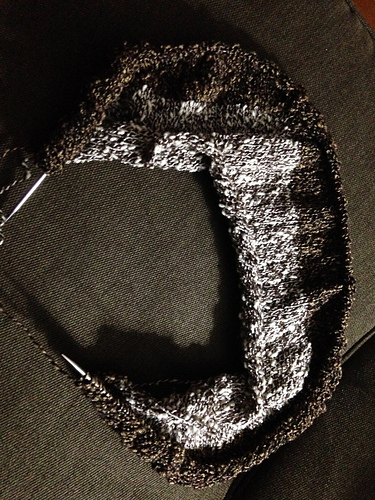 M: Well, Osborn formulated a plan of recovery. She pulled back just four rows of that delicate, bumpy boucle yarn, then adjusted the pattern for a much more gradual rate of increases, so she could add in two more inches of yoke without making the whole garment too big. That was a smart move. You can see from her pattern just how complicated the original is, and how difficult it would have been to factor her different row gauge into the whole pattern. 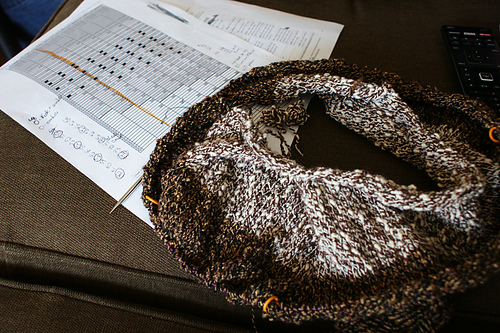 S: I’m not so sure, Meg. That complicated shaping is there for a reason, and the row gauge error means the shaping will be too sharp on the top two thirds of the yoke. She’s playing fast and lose with design right now, which is very dangerous with a garment. Finishing on time is one thing, but is it worth it if she ends up with a garment that bunches up on her shoulders?

M: It’s daring, I’ll give her that, Steph. But as we were saying, she powered through late last night, making a fully 8.75″ yoke –

M: -before splitting the piece, putting the two sleeves on separate needles, and joining the back and fronts under the arms into one piece. Now tell us about what she’s doing next, Steph. 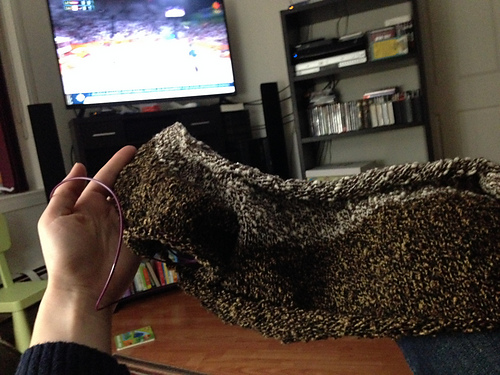 S: Sure, Meg. Osborn has made the decision, on this top-down sweater, to work the sleeves before the body. This is an unusual move, and the reason is that she wants to make sure she has enough yarn to make it to the finish line. It’s a long-body sweater, but she’s decided she definitely wants long sleeves, so she’ll get those sleeves done first, then shorten the body if she has to on the way down. She also has this color issue we’ve talked about; she hasn’t decided yet how she wants to change the stripes in the body. She feels more secure on the choice of sleeve colors and length, so she’s going to tie those up first. 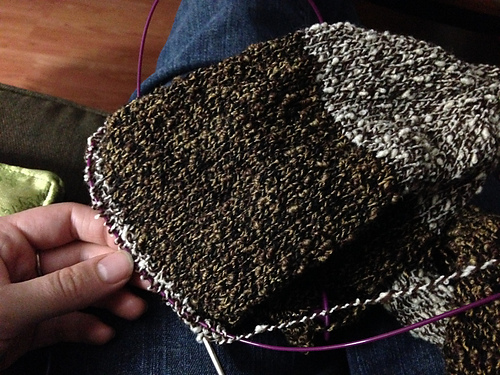 M: This is defying convention, but I don’t see how it’ll hurt anything. Creative thinking under pressure is what will get her through these games.

S: The real question is, can she keep up this pace she’s started, Meg?

M: You’re right, Steph. She’s been up early mornings and staying up late nights, because she wanted to get through that complex yoke over the weekend. She can’t sustain that pace, but she doesn’t need to. Now that she’s through that, she can settle in over the long work week, just picking it up and doing rows here and there, still making progress even though she has to continue being a wife and mom this week. Because, and we should mention this, she’s coming back to the Ravellenics after having not just one but her second baby, Steph.

S: And as we know, competing on a used uterus is always worth commenting on in the Olympics. 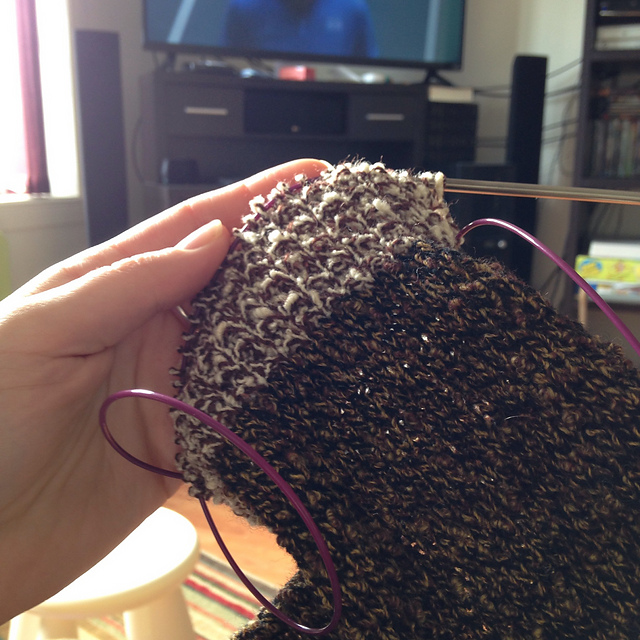 M: Now she’s all set to cruise down her first sleeve, and after a busy morning she’s already made a dent in the textured portion of the sleeve.

S: We’ll be watching her closely this year. She’s made this strong start this first weekend, but we know her attention span can be weak, and nothing’s in the bag until it’s bound off.

M: This is Meg Swanson and Stephanie Pearl-MacPhee reporting from the Triathlon Dome. Back to you, Ron.

[With apologies to two of my favorite knitter/author/designers. If you’ve never checked out Schoolhouse Press or the Yarn Harlot, they’re very different, but two of the greats.]

One thought on “Colour Commentary”