This is what my house looks like right now. 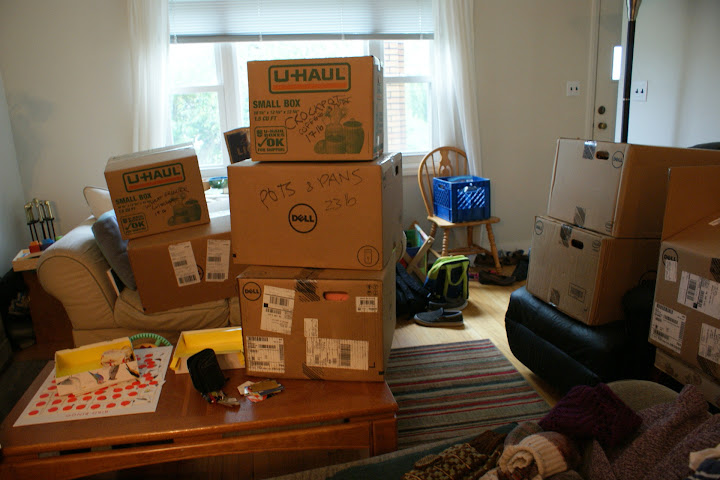 Pretty much every room of my house. 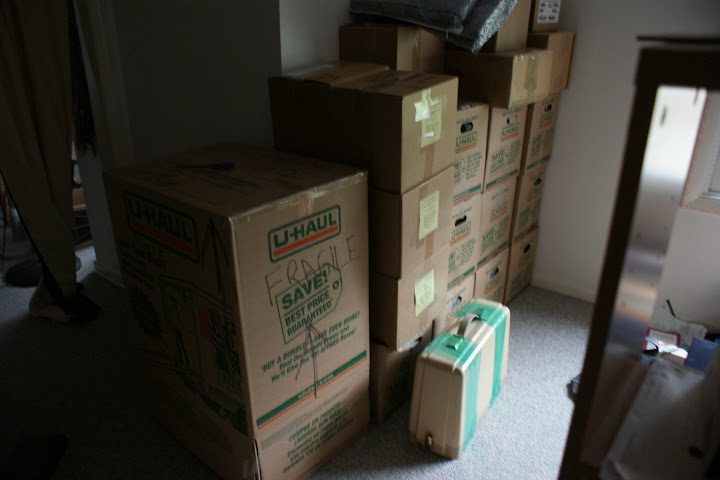 That ungainly large box in the foreground, actually two extra-large boxes nested one over the other, is my attempt at safely packing my mostly-diassembled Ashford Traditional spinning wheel.

Because we are moving our possessions by sealift (read: boat), our move is strangely divided into two segments. Everything we want to put on the sealift has to be packed by Thursday, as this weekend we are driving it all up to Ottawa to hand off to a packing company. Then we’ll come back and spend three weeks ridding ourselves of everything else.

This two-stage approach has advantages and disadvantages. On the plus side, it’s a major help to de-junking. Normally, getting rid of stuff is so much work that I end up throwing a lot of useless junk in boxes and taking it with us. But this time, during this first stage, we are only packing the stuff we want to keep. If we don’t want to keep it, we ignore it this time around. Then, once the shipment is gone, tough luck. After that, if we don’t want to store it in our parents’ basements, or haul it around the country with us, it has to go.

I have thus also described the disadvantages of this approach. I don’t think it likely, but I’m a little worried that we’ll miss something large-ish and important that we wanted to have with us. Also, we’ll have to spend three weeks in our house living with mostly junk, while trying to get rid of it at just the right time so we don’t have to sleep on the bare floor. It means we’ll be coming back from our sealift trip to the hard, unpleasant part of moving. It means that after we have effectively moved, all the hard “letting go” part will still be before us.

I show you my crafting issues as a case in point. I had a huge overflowing basket of repairs in my yarn room/guest bedroom, which I’ve been studiously ignoring for years. At the beginning of our marriage, I said once to my husband, “Don’t you trust me? Of course I’ll fix that hole in your sweater. Just put it in my repair basket!” Compare that to last January, when I said “Do you ever want to see that again? Then don’t put it in my repair basket!” I finally had to fish through the whole thing (I’m not keeping the basket either). Mostly it was my own clothes that I would have given away at this point even if they were without holes; there were a couple items with holes of a size that I now routinely live with rather than repair. But there were a few genuinely valuable articles that I knew I’d keep. Mostly socks with holes in the toes (I am never using a round toe again, and I recommend it to no one). 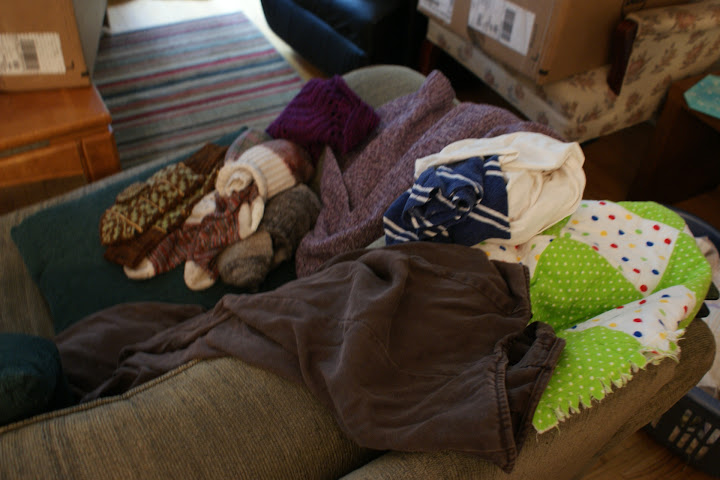 As expected, it took about an hour to do most of the repairs I’ve been ignoring for years. I suspect I will never learn from this.

There were two big fixes, though. One was in a favorite pair of socks that I’ve worn so much that the balls of the feet are transparent. 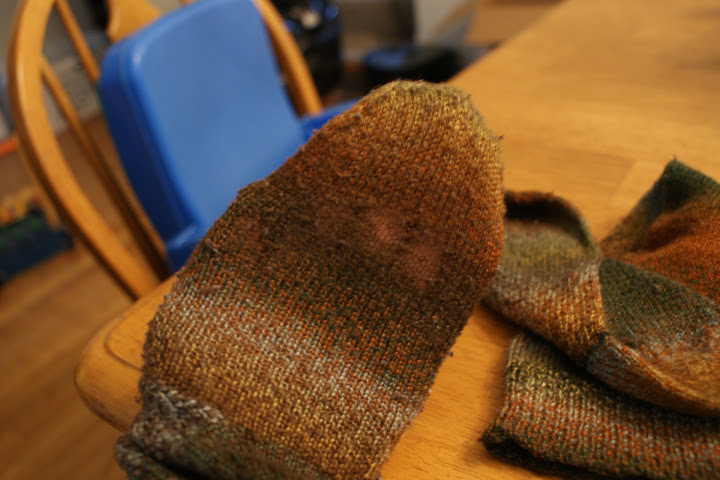 I should have just let these go, but I have a deep affection for them. They are all the colors that I love the most, in the way that I love them the most, together in one place. When I gave all my sock leftovers away last year, I actually kept the tiny ball of leftovers from these socks, in case I needed to repair them. Despite the socks already being six years old. And for once, it was a good thing I held onto it. 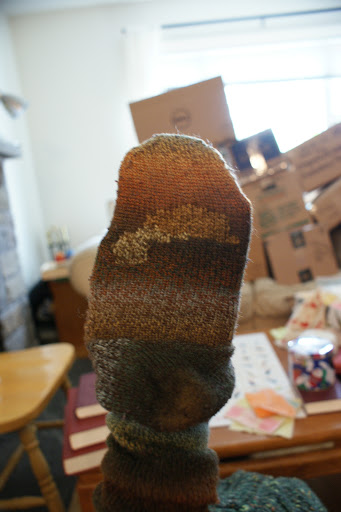 On the first sock (above) I did my normal repair method: just a whole lot of duplicate stitch. This reinforces the original fabric so that there should never be a hole where a hole was threatening.

However, this weak area was so large and so thin that fixing it took hours (hours that I do not have right now), and still looked horribly uneven. So on sock #2, I tried a different method. 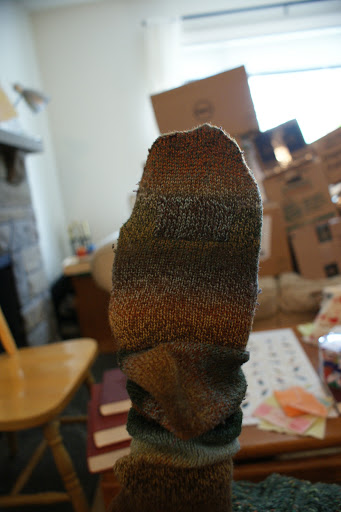 I picked up stitches from in the fabric below the fault, knit a patch, grafted the top straight back into the fabric, and mattress stitched the edges. So the original fabric is still there underneath, and will continue wearing ’till it’s a full-on hole, but there’s a patch in place for it. Looks way neater, and was way faster and less maddening to do.

We’ll see how they both perform long-term. On the bottom of my foot, looks don’t matter so much as function. One might be weirder to walk on, and either or both might add wear to the edges of the correction, leading to an early hole there. We’ll see.

The other big repair that I sucked it up and fixed was a major error in my beautiful Reward Sweater. 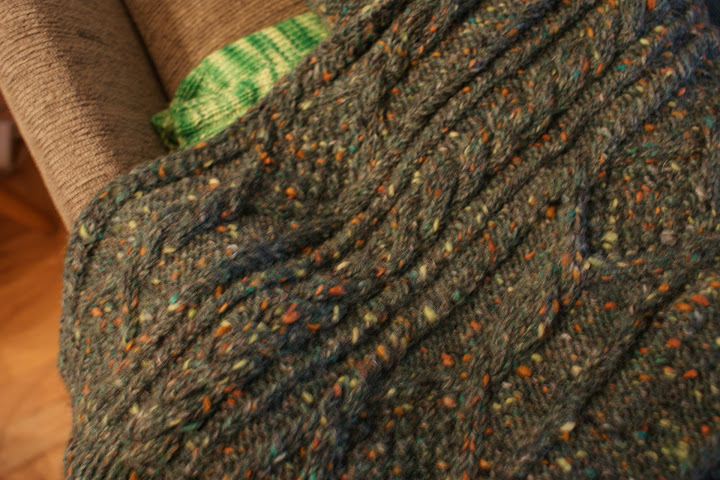 Can you see it, despite the blurry picture and poor lighting? Not just a miscrossed cable, but the cable totally changes direction after the first eight crosses. And I continued quite consistently and wrongly all the way to the top!

I decided, instead of fixing the incorrectly crossed cable above the error, to fix the bottom half. It’ll be the same as the cable on the other side, rather than symmetrically crossing the wrong way, and I knew it’d be a lot faster to fix.

Today, one clip and a lot of unraveling led to this terrifying sight: 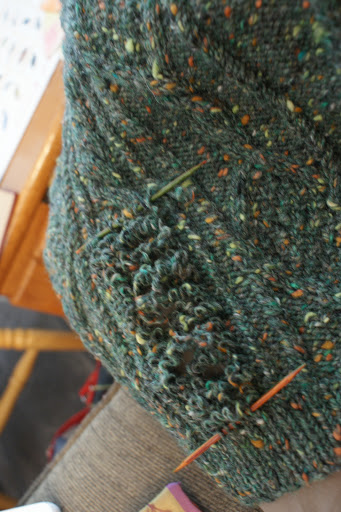 Knitting this cable back up drew on all my hard-won repair skills. I had to be very careful to knit back up using the right floats; I didn’t want to miss any or cross them. It was a task to keep the stitches even as I knit my way back up. I made much use of the skill of counting rows after cables (a task in itself). And believe you me, every time I crossed that cable, I double checked to make sure it was the same as the cable above. 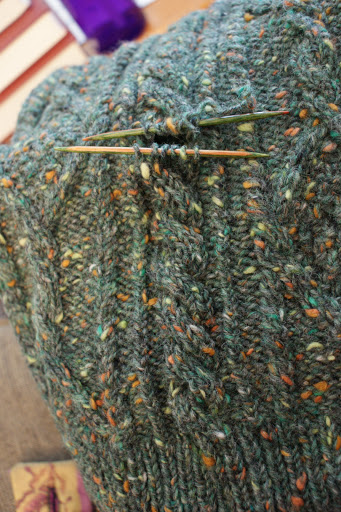 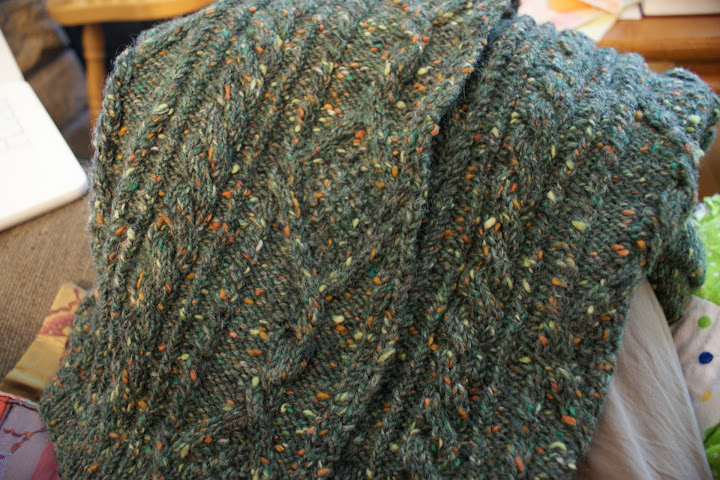 And now, with the two sides side-by-side, I can barely tell which one was wrong. Huzzah!

All my clothes are packed for the sealift already, but this will probably grow in the ever growing pile of “I forgot this and it’ll get thrown in a random box Thursday night.” I still need to install toggles and make loops for them, but it’s wearable like this, so I’ll wait. I finally got over my indecision and ordered some toggles, but they won’t get here before the boat leaves. So they’ll get dragged around the country with us. So long as I remember to bring some extra yarn to sew the things on and make the loops.

That work done, I can finally get back to knitting!

Yes, knitting! I am still knitting the green sheep sweater. Remember how I was going to learn from all my mistakes? How I wouldn’t have to re-knit half the second one after all my errors on the first? Yeah, no. 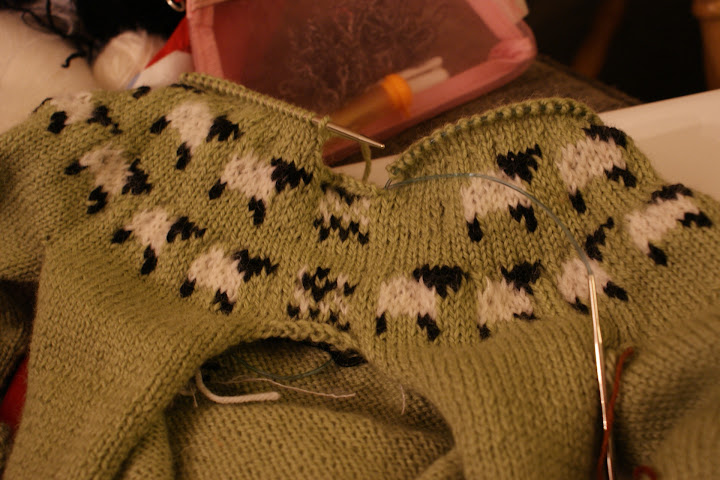 I read the instructions on how many stitches before starting the second row of sheep, and promptly did it wrong. I kept going, knowing darn well that there were way more plain stitches on one side of the center than the other, thinking “eh, it won’t be that different,” and persisted in my denial until I was about to start the collar.

Deep breath. Repeat these words: I spent too much on this pretty yarn to end up with a messed-up sweater. 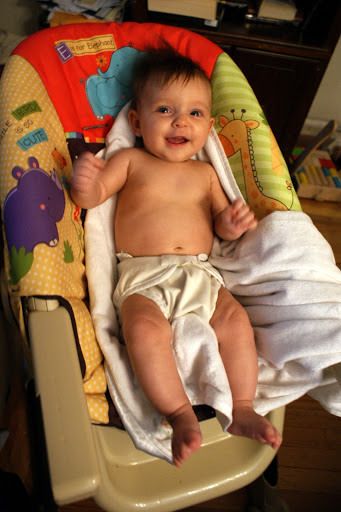 Oh well. No matter how screwily or slowly I knit, or how distressingly disordered my surroundings are, it’s hard to get too upset when the Most Important Thing is being a loving wife to my husband and a loving mama to my two little treasures. In fact, all this mess is just highlighting how beautiful and precious they are. As long as we don’t leave each other behind, nothing else will matter.

4 thoughts on “Everything Is Boxes”