We interrupt this narrative of theological reflection and vocational discernment to bring you… cooking tourism. Not culinary tourism, per se, but the indulgence of someone who gets a kick out of cooking with new and different foods. I mean, the eating them is good too.

Warning: if you are disturbed by images of dead and eviscerated fish, you should stop reading.

I have always had a thing for cooking whole animals. That sounds really weird, and I’m sure it is really weird. I’ve really fallen in love with cooking well over the last year or so, but from long before that, I’ve loved doing things like cooking whole turkeys and chickens. (Once I even threw a Canadian thanksgiving party, and invited all our Canadian friends over, mostly so I could cook a turkey twice that year.)

So you can imagine my glee when Jonas turned up at our door on Thursday and handed us a giant fish. 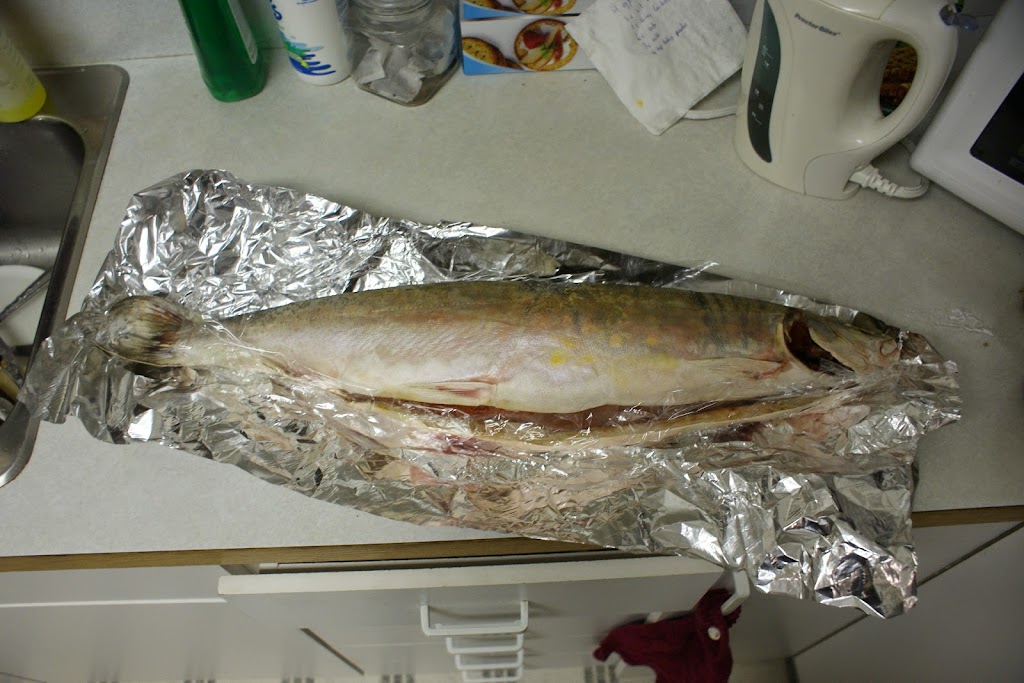 It’s called Arctic Char, and it’s a big deal. Many Inuit people around here make their living catching this fabulous fish. It’s a red-fleshed fish, not unlike salmon. Except unlike salmon, it’s fished sustainably. And as wild salmon is being fished into oblivion at an alarming rate, char has become a hip alternative at trendy, expensive restaurants that make their name on being green. But up here, it’s local. Really, this might be the only place in the world that it’s local enough to be really affordable.

It’s also just big. I swear this thing was as long as my arm. 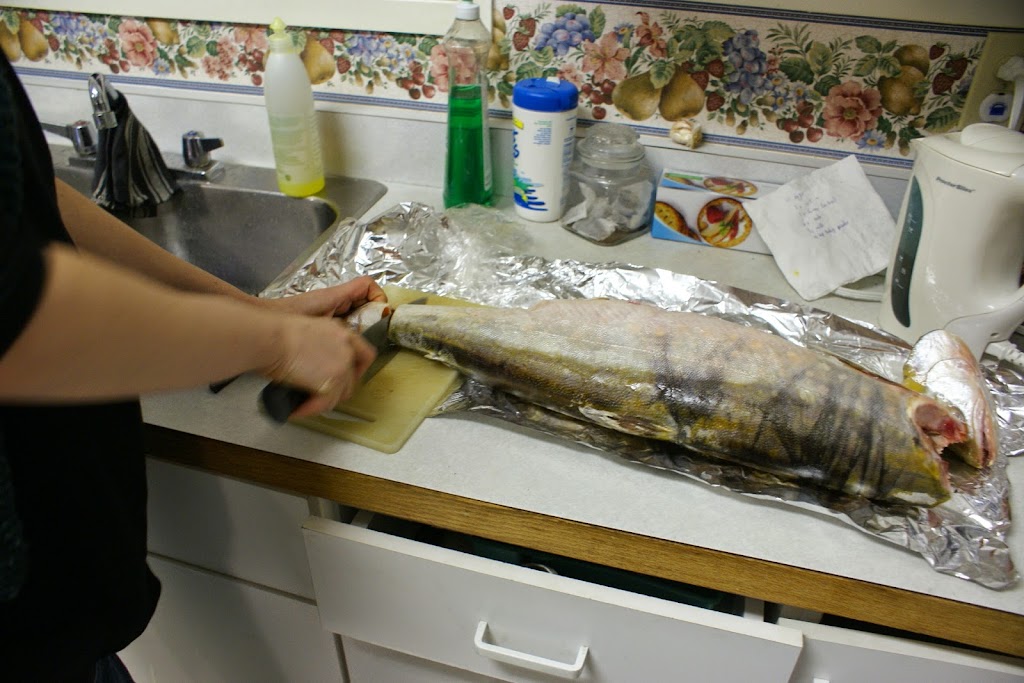 I used to read through my mom’s gourmet cookbooks for fun as a kid, so at our nagging, we cooked a whole fish together sometimes. Supported by the vast intellectual prowess available on youtube, I figured I could butcher this fish. After all, it was already scaled and gutted and everything. All the really nasty parts were long done. 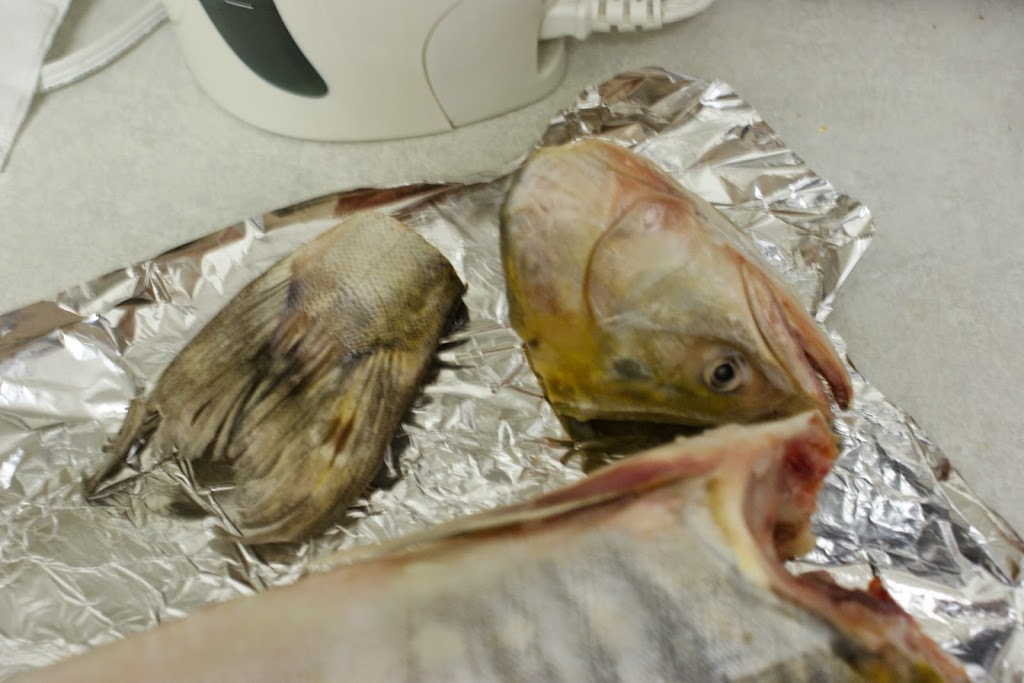 Cutting heads off aside.

I decided to make filets, as they are the most versatile to cook, even if they’re a bit harder to make than just slicing the thing into steaks.

This was the video I used, but I realized immediately that the much smarter route would have been to wait and ask for in-person help. After all, I’m practically surrounded by people who know what they’re doing. But I was impatient. 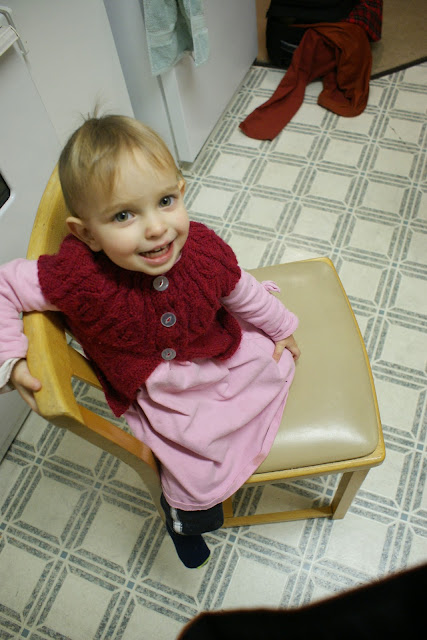 And I had an audience. She drags over a chair and says “watch?” Of course when my hands are covered in fish slime.

I managed to do it exactly wrong on a few important points… I sliced at some strange angle such that all the back was on one side, and instead of pulling out two rows of little fishy ribs, I had to pull out four. But I did it, doggone it. A good pair of pliers would have been helpful, but a dull pair of kitchen scissors worked surprisingly well.

Cutting the filets in half, I ended up with four big pieces of fish for four generous two-serving meals, a sizeable bowl of leftover good fish flesh that had come off unusable pieces, and a big bowl of skin, bones, head, tail, etc. 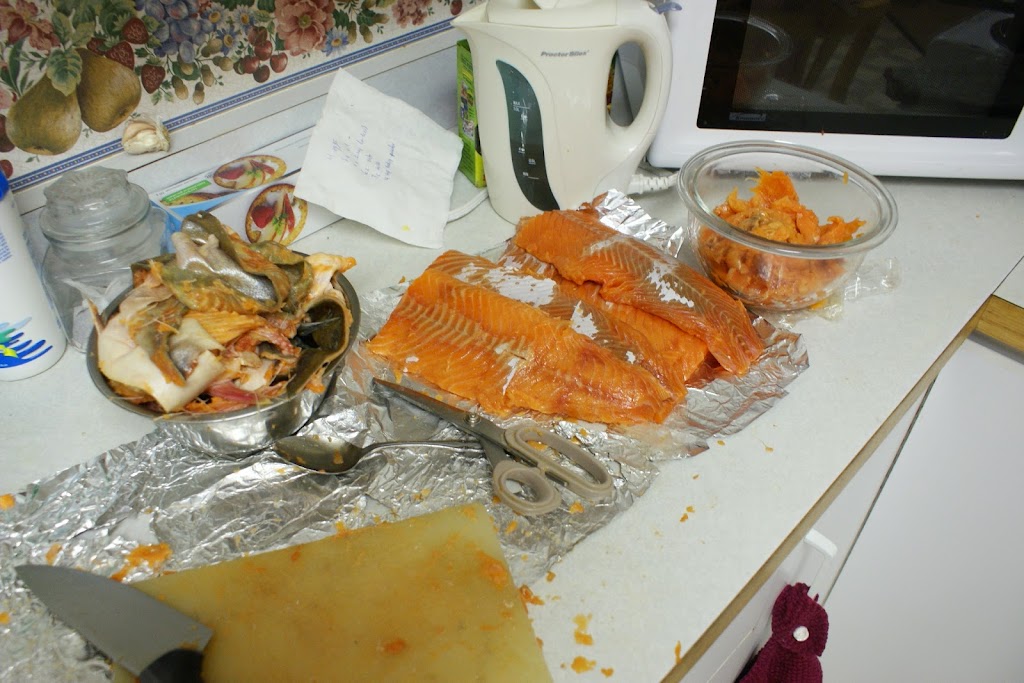 That first night, I wanted to keep it simple enough that the taste of the char could come through. After all, I’d never tasted it before, and wanted to know what it was like. So I gave a filet a good rub with salt and pepper and olive oil (love that there just happens to be sea salt and pepper grinders here in the apartment! The person who used to live here clearly liked cooking too) and baked it at 400 degrees for about 15 minutes. 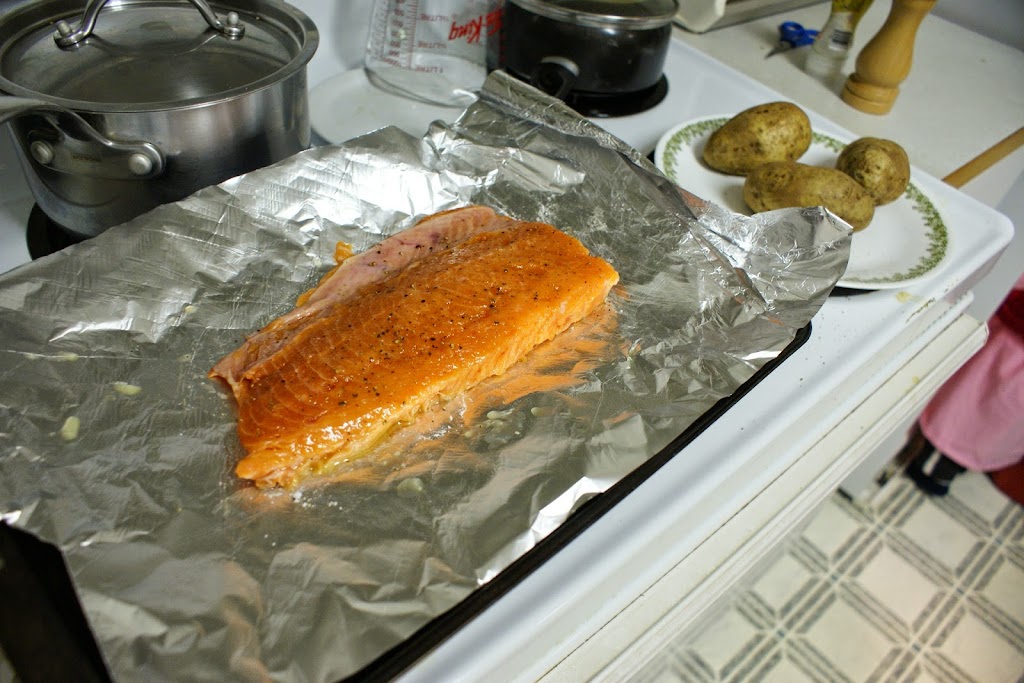 The result was pretty perfect. Flaky, delicious, and light. It’s been a long time since I had salmon, so I’m not the person to compare, but char is certainly from the same family of flavors. 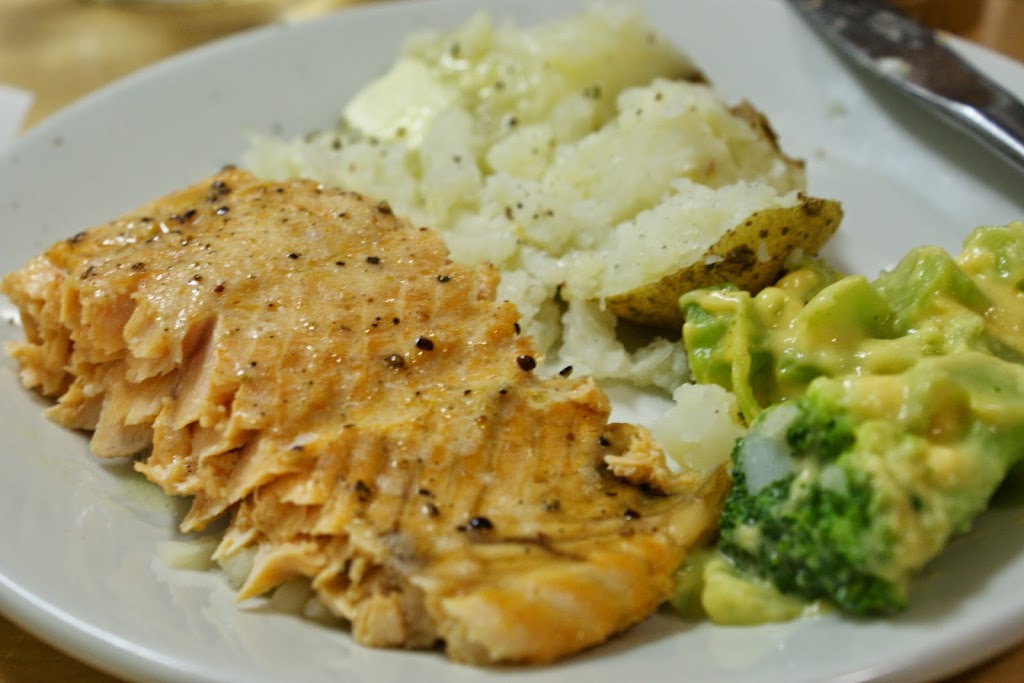 N wolfed it down. And then had seconds. (This never happens.) 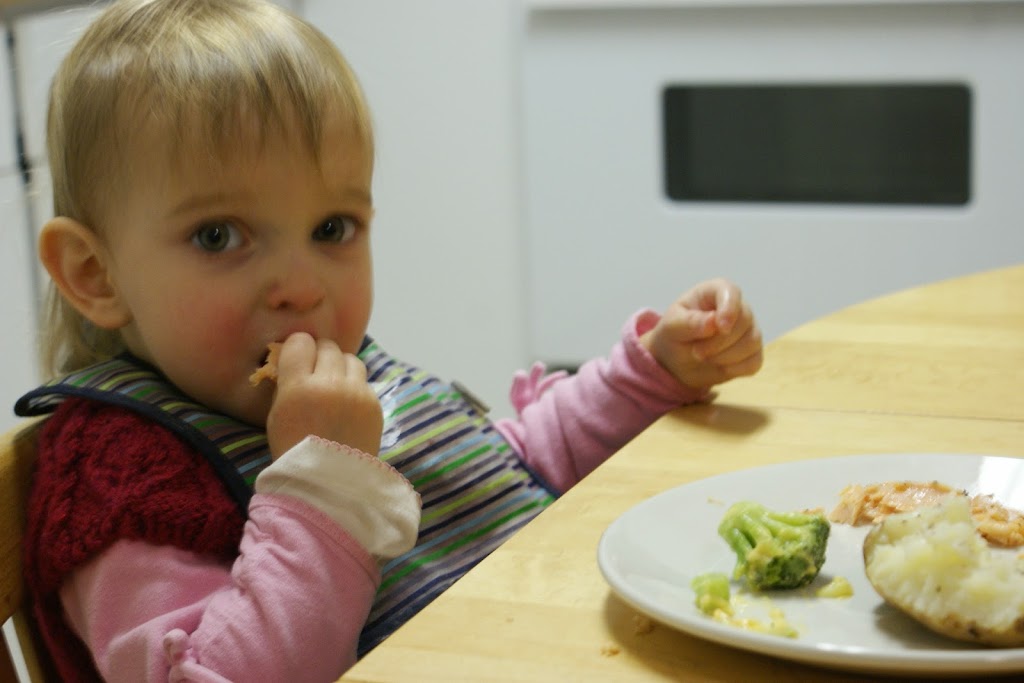 Now, half the fun of cooking with a whole animal is getting to use the whole animal – knowing that as little of it goes to waste as possible. I was already descending steeply into cold-land, with poor husband having made two failed trips to the store to try to find a medicine I can take, so I was highly motivated to make some fish stock. 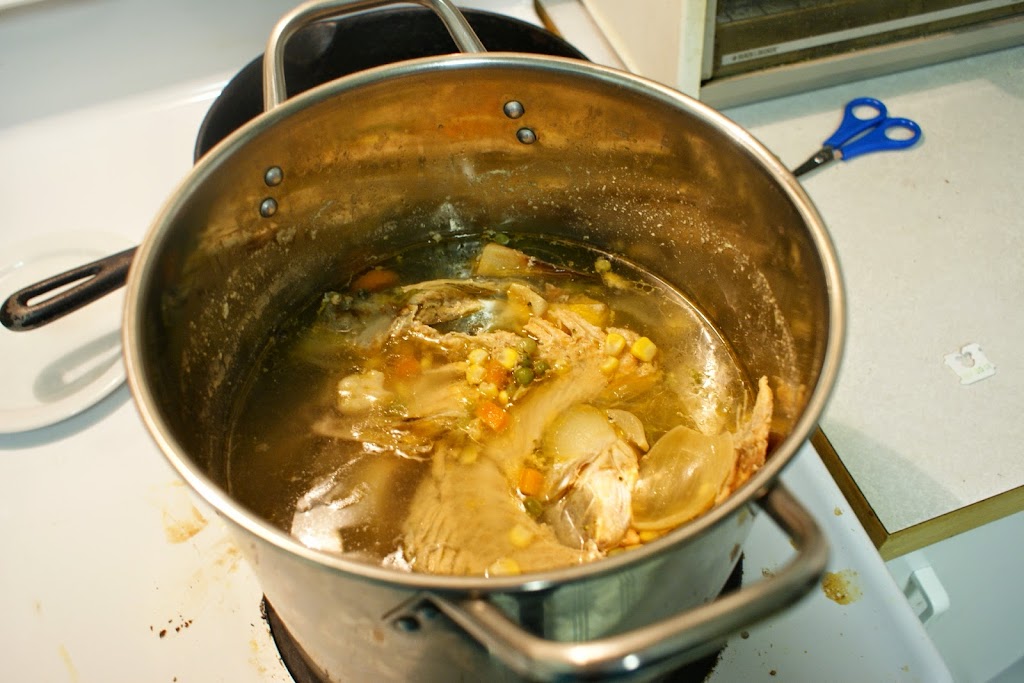 Thankfully, fish stock is much easier to make than other kinds of stock. I guess because the bones are smaller and less dense, you only have to simmer it for half an hour to get all the goodness out of it. At least, that’s what I did, with some mixed veggies from the freezer, a quartered onion, and a few peppercorns. 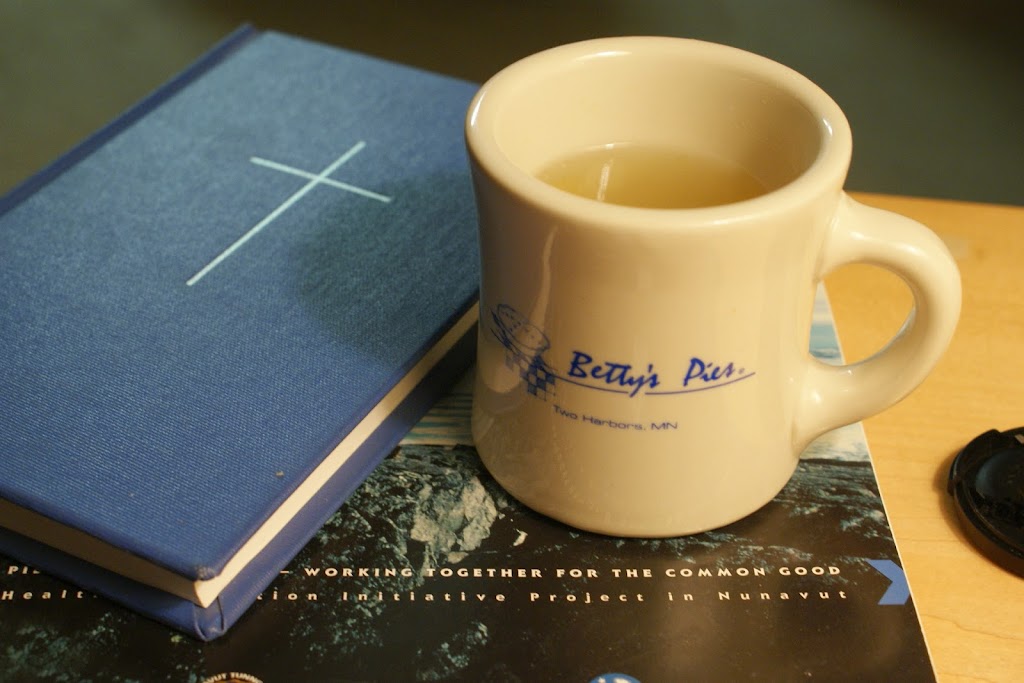 I’ve been drinking a big mug of it every day, like tea. Fish tea. I’m sure I haven’t been doing my immune system any favors by sleeping poorly, and with all the extra refined wheat flour and sugar I’ve been consuming, so it’s nice to have something I know is just straight-up goodness.

It took a bit more puzzling to know what to do with the extra bits of perfectly-good, but rather ugly, fish flesh I’d managed to save from the carcass. A lot of it was practically paste.

The only thing I could think to do with it was a tartare, but I didn’t think I’d be able to eat something that gourmet in enough quantity to get through this quantity of fish. So I did a sort of weird compromise: I made arctic char tartare pate. 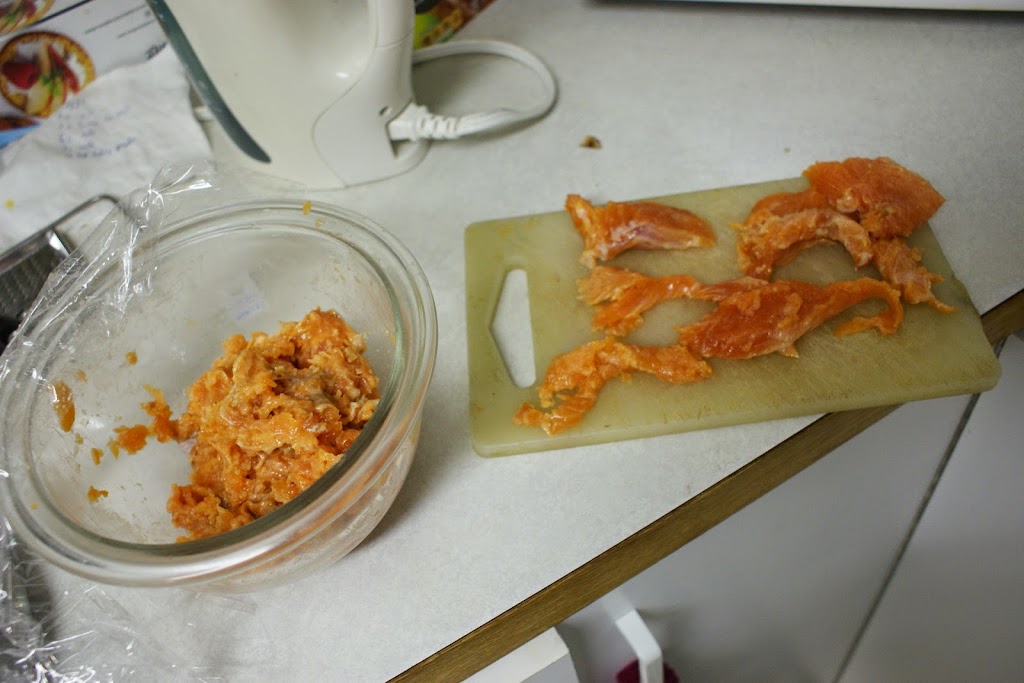 Now, before you go all berzerk on me because I’m pregnant and eating raw fish, let me tell you I’ve done a lot of research on this subject. Mostly because when I’m pregnant, I crave sushi like you would not believe. Women in Japan have been eating sushi while pregnant for ages, etc., but I’ve looked into the actual safety and process.

Basically, you don’t want to get a parasite. But if the fish has been deep frozen, flash frozen, or frozen for 7 days, there’s no chance of it having a parasite. (Fun fact: in the US, fish can’t even get into this country mainstream unless it’s been deep frozen, so you can pretty much eat sushi in the US without worry. And “sushi grade” is probably made up and has nothing to do with safety. You’re welcome.) If it’s wild-caught, it’s even safer. Arctic char is particularly safe because it is always wild caught and deep frozen right after cleaning. And I’ve done all the handling myself since its been thawed. 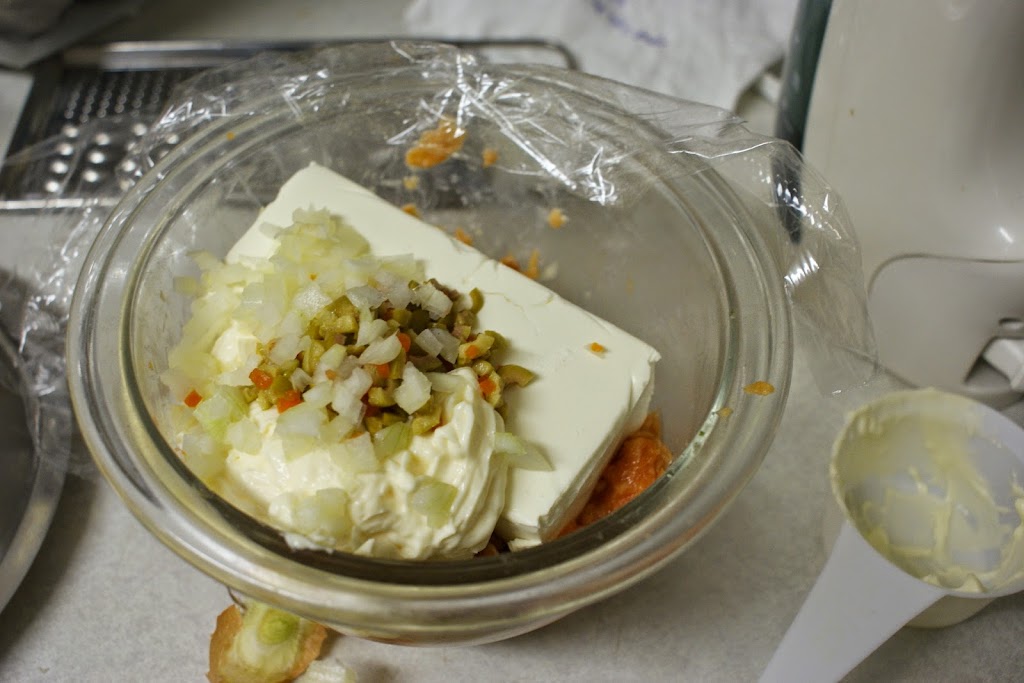 On to the recipe. I started with this recipe for smoked salmon dip, but first I soaked the meat in the lime juice for several hours (that does cook it a little bit). I had no idea how much fish I had, but I knew it was a lot, so I doubled everything else. The local grocery store is quite well stocked with southern amenities, but I couldn’t find capers, so I settled for finely diced green olives. And 1/4 a regular onion instead of green onion. And a hand beater instead of a food processor.

I separated out the big bits of fish, chopped them thickly, and stirred them in at the end after everything else was blended. The result is divine. 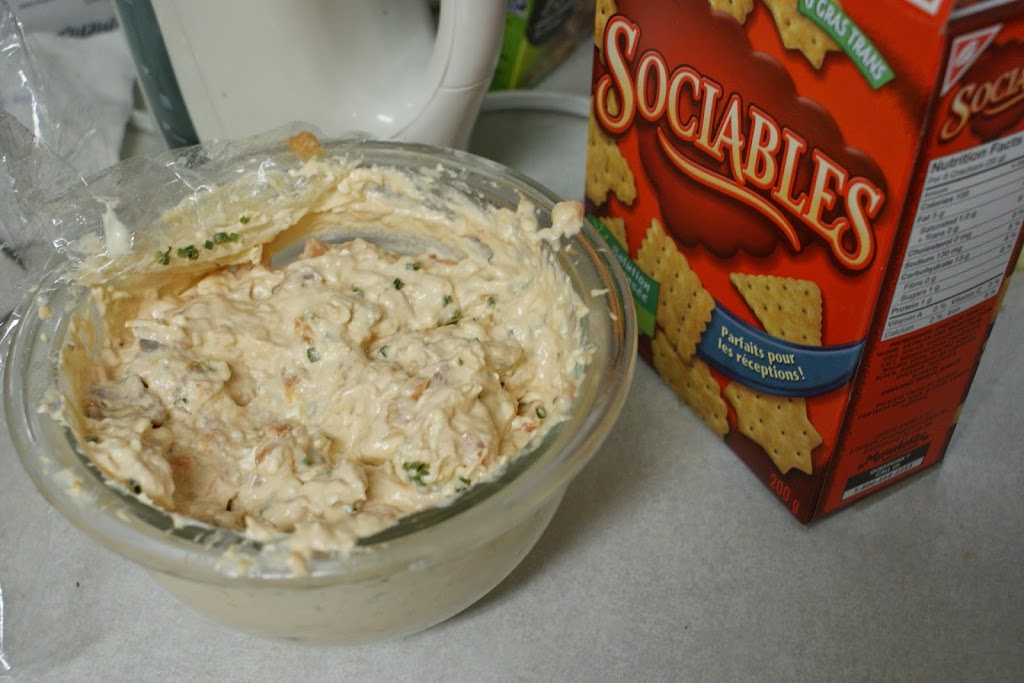 Despite my confidence, I haven’t quite worked up the guts to bring it to any of our social events, so we’ve been eating it in quantity at home. Thickly spread on toast for lunch, I feel stupidly spoiled.

For night #2 of filet, I wanted to try a different cooking method. I used this recipe, which treated the fish simply with salt and pepper and olive oil, just like the night before. But being quickly pan-fried, it was like eating the char version of a medium-rare pan-seared steak. Definitely cooked, but moist and smooth. The balsamic potatoes were yummy too. 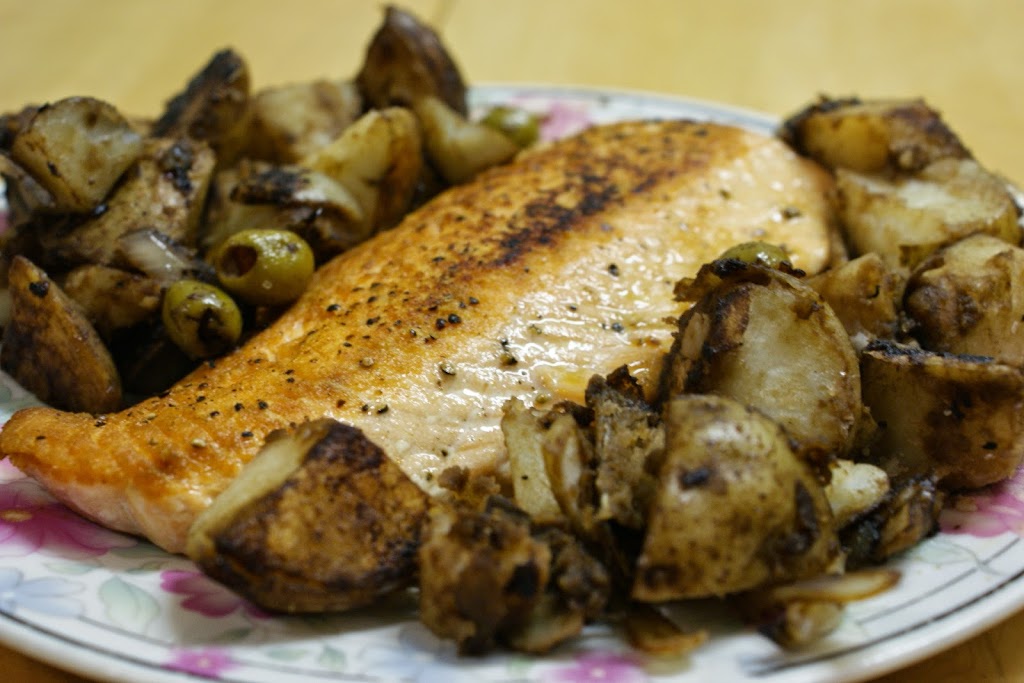 Tonight I felt beyond too crappy to cook, so Jared cheerfully stepped up. Among the many strange treasures hiding in our apartment, he found a maple-mustard glaze, which he spread over it very thickly and baked it as above. I liked it a lot; the sweetness of the glaze didn’t compete too much with the light fish flavor. 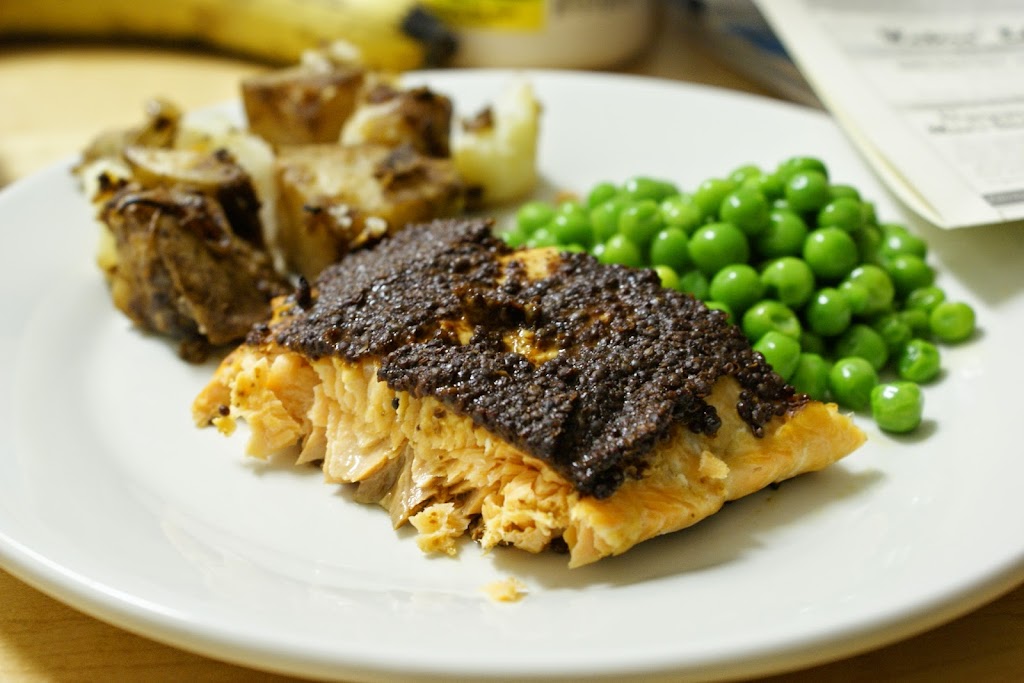 I’m debating what to do with the last filet. We have some bacon, so I could do something bacon-wrapped, but I have no experience doing that, and I haven’t found a recipe that gives me much to work with. I’m also considering boiling it, the traditional Inuit way. We’ll see how we feel when Wednesday rolls around.

I really love fish. I’m sure I could get sick of it after a while, but if this is the staple affordable meat up here? I think I’ll live.

Thanks to everyone on facebook who gave great recipe suggestions!