We found out a week ago that we are having another little girl. (“Patricia” being her gender-ified in-utero nickname, NOT her real name. Haven’t decided on that yet.)

We’re very pleased. We are sure boys are fun and stuff, but we’d gladly raise a houseful of girls. And I just realized… now I get to knit little matching girly things!! There’s a sentence that merits two exclamation marks! That is, if i can get over my aversion to knitting anything twice.

Naomi called it, by the way. I was feeling boy, others were guessing boy… but every time we asked Naomi, “do you want a little brother, or a little sister?” she would always say “sisser!” Never mind that this is probably because she’ll always just repeat the last thing on a list. A rigged poll if ever there was one. 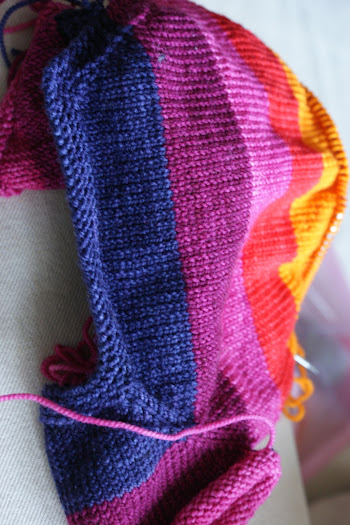 I am blasting through girl #2’s first little sweater at the speed of joy – partly because getting to the next color change is downright addictive, but partly because it’s the perfect knitting for staring at a toddler all day. Plain knitting… I knit while Naomi plays with blocks; I knit while we chit-chat; I knit while I wait for her to finish eating cheese; I knit while she’s in the bath; she no longer likes to sit on my lap while she reads, so I knit while I read to her, as she sits on the big rocking chair and I sit on the ottoman. (That’s my rule. If she gets the comfy chair, I get to knit.) I can drop it in a flash and pick it up without thinking.

At this rate, Naomi might indeed get a matching one.