Last week I showed you my end of the bargain; I made McKenzie two pairs of socks that I am just a titch pleased with. Now you get the big reveal on what McKenzie made: original artwork for Naomi’s birth announcements.

McKenzie has a wee farm operation going on not too far from my home. We have never met, but connected when I worked in exchange for a share at Breezy Willow Farm in West Friendship, MD. My “work” was to, for four hours a week, go to a farm and play with their wool. And get food in exchange. Pretty sweet, right? Anyway, I dyed a whole mess of Breezy Willow’s fleeces, and a couple alpaca fleeces from McKenzie. I subscribed to her blog, commented every now and again, she commented a couple of times, we became facebook friends, had a couple conversations… and I guess that’s how friends are made on the internet! I am new at this! Anyway, when I saw the birth announcements that McKenzie made for her new baby sister, I knew I wanted her to do Naomi’s.

This was the first time I had been on the client end of a commission relationship. I knew, from working on the other end, that the one thing you need from your commissionee is feedback. And ugh that was harder than I thought! One doesn’t want to criticize someone who is doing something very nice for you, especially when they are an expert in a field you aren’t (last time I tried to draw or paint something was in high school). And it’s sort of embarrassing to make creative suggestions – when you like someone’s work, you imagine they will just magically create something that you love, since you’ve loved everything else they made. But of course that’s silly. On the other side, when you’re making something to order for someone, you don’t care about your ego; you just want to make something they love in the end, even if it means extra work. It was good for me to work through that; McKenzie put in lots of work on the piece in a couple of versions, sent me lots of drafts, and produced something stunning. 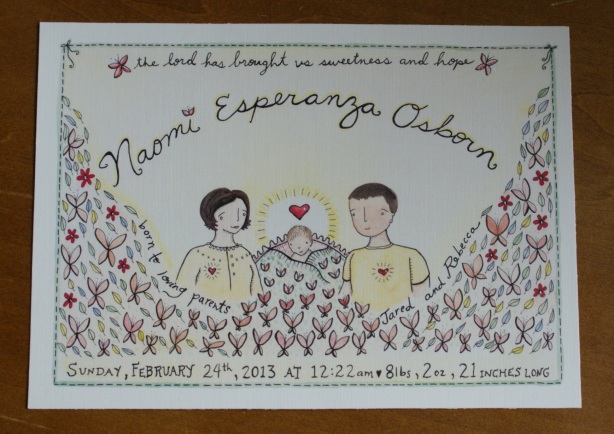 The butterfly wings are supposed to look like little knit stitches. I sent McKenzie the idea, but she put in so much detail. My only other request was that there be some dark red – a reminder of the adversity through which this little girl was born. The rest is all McKenzie – the picture doesn’t convey the level of detail. I’m so pleased she sent (what I think is) the original, on a nice backing. I will have to find the perfect frame for it.

When I had the cards in my hot little hands, I started trying to get them out the door – and I remembered why I haven’t done Christmas cards in three years. They are a lot of work! There’s choosing recipients (there were so many more of you I wanted to send them to!), writing a letter, getting it printed nicely, acquiring envelopes, remembering how to print labels, and in this case ordering pictures to include. We also added graduation announcements to those going to Jared’s family, to save a stamp. Since the announcement itself was art, I wanted to include a photograph too. Getting all the pieces together took a couple weeks, and then it took mom and I two entire episodes of Doctor Who to assemble them.

So during an opportune moment, a couple of weeks ago when Mom was visiting, we took advantage of a happy baby mood and whisked Naomi upstairs to the futon. (This has become our baby-photo-shoot spot.) The results were thrillingly adorable. Here’s the shot we settled on to send out:

But this is the internet. Bits are cheap. So I can show you as many as I like. My little girl still has her grey eyes, impossibly huge as ever, and loves to smile and chatter on about things. Sliced bread has nothing on her. Here are the rest of our favorites. 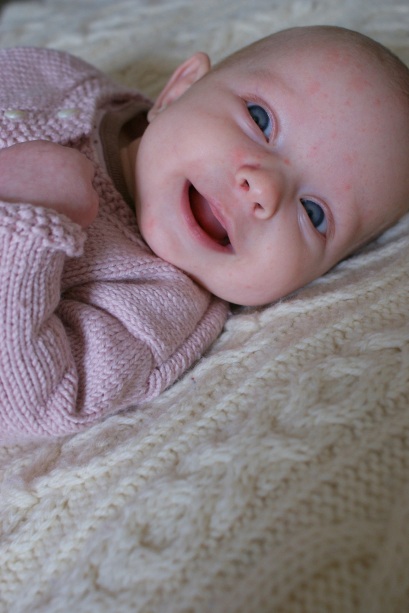 So even if you get an announcement, you get to see the art, the story, and even more pictures. Don’t ever say I don’t love you. And/or that I won’t take any excuse possible to show off my baby.

3 thoughts on “Barter is Awesome, Part 2B”