Thanks to everyone who bought things last week, and who looked at my wares desiring to support us! I appreciate you guys SO much. Whether by gift or sale, nearly everything has a home now (several of them in my closet [my hypothetical closet whose contents mostly live on the floor]).

The last week before leaving town for Christmas is always a little hectic. Jared’s been up to his eyeballs in schoolwork, a saga I will spare you. I submitted my last assignment on Monday, but my week has been filled with things like doctor’s appointments, work, Christmas parties, Hobbits, and being hopelessly tired due to lack of sleep (it’s not the baby so much as recalcitrant sinuses. I know, it’s not that hard to turn on a humidifier).

We expected to leave town Wednesday, but when that didn’t happen, I finally got a really leisurely day on Thursday. I made a nice breakfast for team Osborn, cleaned the kitchen fussily, wrapped gifts even more fussily, and watched nearly 7 episodes of Once Upon a Time (so good!) while working on last minute gifts. Around 6:30 p.m. we learned of a snowstorm coming the next morning, so the liesure ended. We packed in a frantic hour and a half, went out to dinner with Roommate A, and drove through continual pouring rain to arrive home at 1:45 a.m. I spent the day being grateful, since probably the last time in a very long time that I will be able to wrap presents fussily, pack for a three-week trip in an hour and a half, or watch seven episodes of anything.

For the last three years that I’ve had this blog, I’ve used the 12 days of Christmas to do the *Big Reveal* on everything I’ve been knitting for Christmas. Well, it’s going to be a bit of a stretch this year, because I haven’t done that much Christmas knitting. My knitting life for the past six months has been almost entirely sweetwater and commissions, some of which were turned around so quickly that I didn’t even get pictures of them. It’s been *awesome* to get this much commission work; I never expected it and I’m grateful for the income. It’s not even boring, when I stop and apply my creative juices, so I don’t know why I haven’t written more about it!

But in the meantime, I’ve been promising myself that as soon as Christmas arrived, I would go back to knitting for fun. With 8 weeks of pregnancy to go, you’d think I’d get on that whole knitting-for-baby thing, but instead I found myself compulsively casting on a new sweater for moi as soon as I turned in my last big project (last Thursday night). If you have a very, very good memory from when I came down with the Sweaterlust last year, you might even guess what pattern it is.

I have been in love with the Hampton Cardigan since I saw it, easily two years ago. It’s just so… tasteful! I don’t know how to explain t, whether by the fitted body and loose sleeves, the underbust fastening, the wide dose of garter stitch… It doesn’t matter; I just like it. AND it’s maternity-functional. There comes a point when it doesn’t matter what else is going on in your life; you just have to make time for that special relationship you want to start. So I pulled out the six skeins of heathery forest-green Cascade 220 that have been waiting for just the right sweater, and I cast on.

I was a little – okay more than a little – disappointed, a few rows in, when I realized that the entire sweater is in gull lace. Gull lace is a simple and classic four-row stitch pattern that is also the main stitch of the February Lady sweater, which I knit a couple years ago. The idea of knitting two sweaters in the same not-very-interesting lace pattern was seeming very uncompelling after just a few inches. I started toying with other pattern ideas… maybe even doing something sweatery with this contest…

Then Monday happened. That Monday on which I told you I turned in my last assignment? On Monday, some stupid things ended up happening that resulted in a firm commitment to the Hampton Cardigan. That last assignment was an online test, and I stupidly allowed myself only fifteen minutes to complete it before I was supposed to leave for a doctor’s appointment. I stupidly rushed through the thing, but still needed 45 minutes just to do a hack job of the essay questions. Then I sped to the doctor’s appointment, stupidly deciding that although the car really needed gas, we’d probably make it and I was already definitely late to see the doctor. I got there fine, but then I stupidly said that since the gas light wasn’t on at all, I’d probably be okay until I got back to a gas station on the way.

WRONG. Otto sputtered to a stop on the side of PA 28 about forty-five minutes from home. I tried every trick I know (okay, the only trick I know, which is jumping on the trunk), and that car wouldn’t start. I finally got in touch with my husband, who agreed to stop in the middle of his impossible load of assignments and come get me, but he still had to locate a car to borrow and get down to me in rush hour traffic.

So there I was, stuck somewhere between Fox Chapel and Lawrenceville on the boring side of the river. I had two hours to kill with nothing to read – nothing to do at all, in fact, except listen to depressing stories about first-grader funerals and gun control on All Things Considered and knit the Hampton Cardigan. 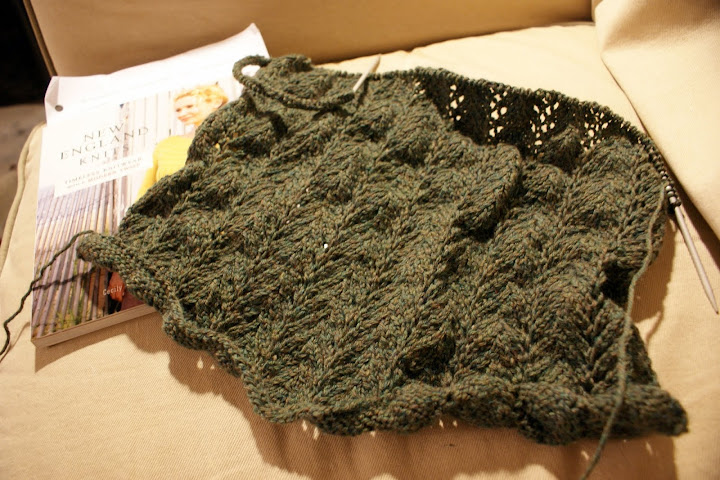 The short version of the story: the back is done. I’m committed. I’ve decided that while gull lace is not particularly stimulating, it’s a classic stitch pattern that is not unjustly applied to more than one sweater in the same collection. In other words, I ain’t ripping that out. Bets will now be taken on how far I get before we get back to PA on January 4th (I think between two 10-hour car rides to SC, there’s a decent chance I might knit the whole thing).

7 thoughts on “Stories of Going Somewhere and Nowhere”