There’s only so many times you can blame absent-mindedness on pregnancy. I’m going to find out exactly how many that is.

I promised you the tale of our wool-related adventures in RI, then promptly got sidetracked by trying to get the last clue of the Pentecost KAL out the door. Then I got distracted by, you know… watching TV, and generally making the most of my last two weeks off school. But I have plenty to blog about! So, since we’re headed out on another (short) trip in a few hours, I figured I’d better catch up from the last trip, eh? There’s loads, so you get two batches – northern Rhode Island and The Rest.

Tuesday was our free day, on which the family planned ahead to have no plans, and we could divide up into our smaller units to do what we liked. Jared and I decided to head up to Providence, where I at least had never been before, to check out old churches and yarn dispensaries.

We explored the church of the oldest baptist congregation in America (above), which is still running, if mostly for concerts;

And we drove past the now-closed cathedral of the non-defunct Episcopal diocese of Rhode Island. I’m sad about it; let’s not dwell beyond that.

There are several yarn stores in the immediate vicinity of Providence, but the one we could find was Fresh Purls. This adorable shop was clearly invested in the newest and coolest yarns available from the big companies. They’re quite big on Berroco; I recognized some of their new yarns for the season that I’ve not seen anywhere else yet. Not much KFI; good on ’em. Plenty of sweater yarn and sock yarn, and they were well invested in summer yarns. No local yarns that I saw, but they have an amazing 75% off sale bin. (I got so excited about that I forgot to take pictures of the inside of the store, but click the link above to see.) I scored a big score there, which I felt a little bad about (75% off means a store is choosing to lose money to get rid of something), but Jared off-set it a bit by stashing some full-price sock yarn.

Next, we headed northwest. For your information, we tried to find a store that knitmap located for us called “The Beauty of Yarn” that we couldn’t find. We found the address, but no store; it was a small shopping center with one unit suspiciously for rent. So don’t spend an afternoon trying to find it unless you find a phone number and reach them.

Our northwest heading was out into Rhode Island’s farm country. In this tiny state, in which you cannot drive in a straight line for more than an hour, there’s a surprising amount of geographic diversity. Or at least, there’s the coast, which has been vacation land in America for hundreds of years, and there’s inland, where an amazing number of small farms, mills, artists and craftspeople, and other little businesses have been around for ages and continue to thrive.

Our first stop was Maybe Tomorrow Farm. Chris, a lifetime sheep farmer and son of the farmers next door, let us interrupt his day to show us around.

They specialize in various leicesters, and big mutts he called “coloreds” (oh my). They were gorgeous, and very friendly. We caught him just as he was getting ready to take them to a county fair to show that night.

Just few miles down the road was Bally Duff Farm, whose owner was kind enough to open also her wool room in the barn so we could shop her wares. She specializes in Lincolns. 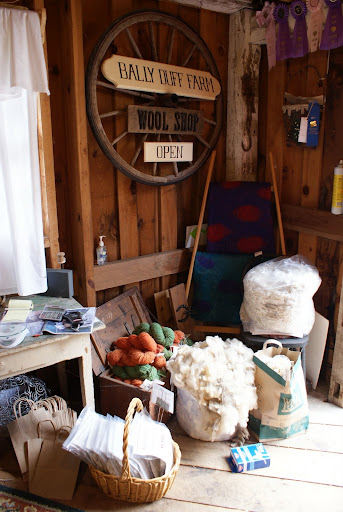 From both proprietors, I bought some roving to play with and use for my upcoming drop spindle class in November at Old Economy. I have since learned that if you want to visit a sheep farm, you should call ahead (oops) and plan your visit for the morning (double oops). But in both cases they were very kind, if businesslike. Summer on a farm doesn’t leave a lot of extra energy for surprise social calls from tourists, I imagine. But both are also frequenters of the Maryland Sheep  & Wool Festival, so you can bet I will save up some money to make their kindness retroactively worth their while.

The country is beautiful out there. It reminded me a lot of Howard County, MD, where I grew up, except with a sense of being much older. I imagine getting land out there isn’t the easiest thing, and that much of it is probably owned by the same families that have owned it for a long time. But that’s for the best. There’s not as much pressure to sell to developers, and there’s a way in which RI is just used to being a very local economy.

One of the advantages of having no idea where God is going to call us is that every time we go on vacation, we can think “maybe here!” If God wanted to call us to live in Rhode Island… that would be all right. You know, really… we’d be okay with that.