My turn for a spinning post, while Mom and I are spinning our arms off here in the yellow brick house hidden behind a terrace of day lilies. Mine is one last story from Maryland Sheep and Wool 2012 that’s taken a long time to share because… well, it’s a long story.

How do things end up on a bucket list? Especially at age 26? I’m too young for bucket lists. But start early and you stay ahead, I guess. Somehow, the idea has noodled it’s way onto my bucket list that I want, one day, to participate in a sheep-to-shawl competition. That desire fed directly into what happened on Saturday and Sunday.

On my shopping list for sheep and wool was a silk hankie. The Yarn Harlot has been going on about them for ages, and they’re gorgeous, so why not. I stopped at the first place that had them, went through every one, and picked a lovely deep burnt orange one. But next to the bins of hankies and other kinds of silk, there was another open bin of fluffy objects that I could not identify. And there was a really pretty one right on top. (This picture is from the next day; the one I got was close to the grey-blue one on the right underneath the white one). 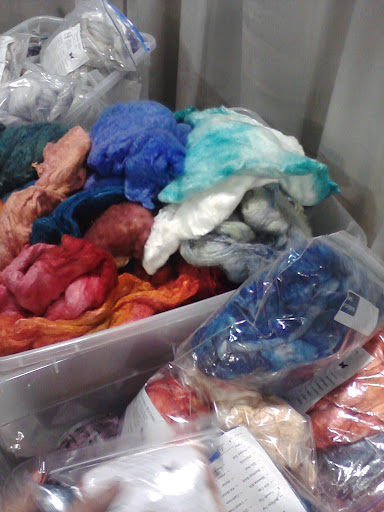 The lady at the booth (It was either “Spinning Studio” or “Spinners’ Studio,” but Google is unhelpful in finding them) was extremely helpful. She not only explained what “Silk caps” were but gave me a demo on how to spin with them. I had purposely not brought any fiber with me, knowing I would be able to work on something I’d purchased while at the “spin in” on Saturday night.

I already had a little idea in my heart that I was nourishing into a flame, and it required speed. The singles, which I divided more or less evenly onto two bobbins, were thick and thin and underspun, as silk uniquely allows for with its almost infinitely long fibers. I started plying them together at the spin in, and didn’t quite finish, even though we were the last ones to leave.

I finished plying when I got home. For the first and only time, I was able to use this trick successfully to use every inch of my singles, wrapping the extra singles around a few fingers and plying off the inside and outside of this “ball” directly off those fingers. Every attempt since to do this has been disastrous. I think this worked because it was silk. The rest of the time, I will now use a ball winder to make a center pull ball.

I soaked it right then, and hung it to dry with a fan overnight. In the morning, I borrowed a mismatched pair of US1 DPNs from mum, and was ready for the next stage. 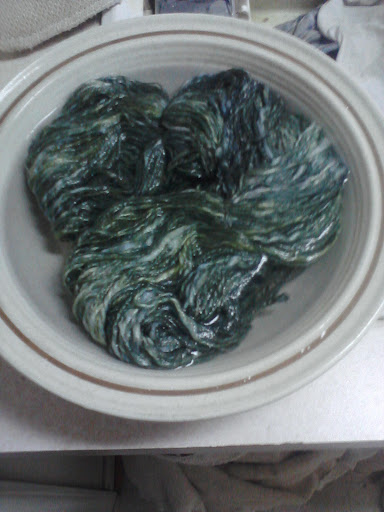 By this time I was determined. I might not be on a sheep to shawl team, but by golly, I was going to participate in a sympathetic exercise, going from fiber to a finished something during the two days of the festival. But I wasn’t entirely sure what that something would, be, yet.

On Sunday, a terse chap straight out of a farm print on his enormous tractor hauled us and twenty other people in his haywagon from the further regions of the parking lot. We’d gotten there early, so we could see the very beginning of the sheep to shawl competition.

When we got to the sheep barn, there were six or so shearers and sheep lined up, waiting for the whistle, with our little crowd of intrepid fiber enthusiasts looking on. First, they all had to shear the belly, then wait for another whistle. Then they were off, getting the rest of the fleece off the sheep as quickly as possible. 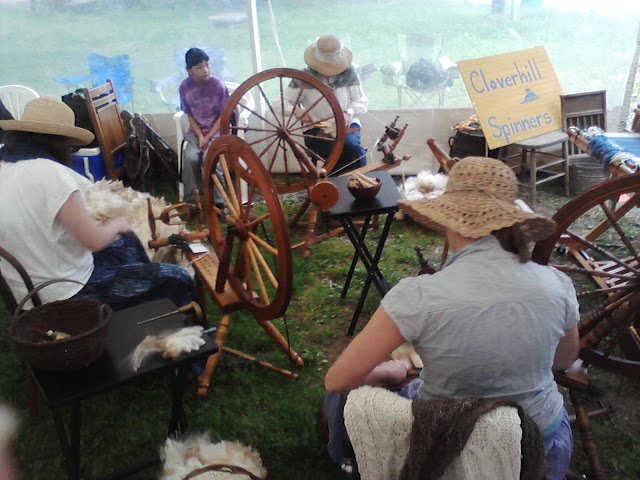 We, of course, were rooting for the Cloverhill spinners, who were competing for the first time. The three spinners had Canadian Production Wheels, an obsession that started while I was still working at the shop. These big beautiful wheels are meant for fineness and speed, but fineness is not really required in these competitions. These ladies had practiced, though, and within a few minutes had wound a few little bobbins for their weaver to start. They had three hours from the start of the sheep shearing to when they had to hand a completed shawl to the judges.

While they were getting started, Jared was holding my little skein and I was winding it into a perfect little robins’ egg ball. By the time they’d been going for 15 minutes, I had cast on a little something or other.

We missed the end of the shawl competition, but I did see cloverhill’s finished shawl. It was a traditional blue and white pattern that stole my heart as I examined the floor loom. I think that was the moment in which a little place in my heart was opened to weaving.

I gave myself more than three hours to knit my little something. The beginning was a little fussy, but for the rest of the day I could cruise around, knitting while we walked and shopped and met with cool people and saw interesting things. By the Sunday night, when we’d pulled back into our Pennsylvania driveway, I’d finished it.

I am calling it a neck belt.

It’s basically a little stockinette strip, with an eyelet/garter border to stabilize it, and five buttonholes and buttons. It can be worn like a necklace, with just the last button buttoned:

(It is extremely hard to take pictures of yourself on a camera phone.) Or you can button all the buttons and have a button choker-y thing:

Or you can button a middle button and have a sort of wee ascot. It’s surprising how much just a little silk – a super-warm fabric – around a key pulse point by the neck can add warmth. I couldn’t wear it for very long in mid-May when I took these picture.

I even made a wee matching bracelet. A “wristbelt” I daresay.

Want to know how to make this little fashion object? Of course you do.

Row 2 (and all subsequent even rows in this section): K2, P until 2 stitches remain, K2.

Continue in this manner, measuring it around your neck (or wrist). When, without stretching, you can touch the tip where you cast on to the stitches still on the needle, it’s time to do your first buttonhole row. (The rest of the length will arrive in blocking.)

Severely wet-block your neck/wrist belt so it doesn’t look like a napping slug.

Using the buttonholes you made as a guide, attach the 5 buttons on the non-holey side.

Wear it with flair and the confidence that you have started a new fashion trend.

So what do you think? Cool and edgy or inexplicably random? Maybe a little bit steampunk? Should I make a dozen neck-wrist sets and sell them on etsy?