By a fluke of personality, I avoid work with more work. Lately, my favorite avoidance technique has been spinning. Stuff to pack? Sit down behind the [spinning] wheel for a little bit. Got some intense knitting deadlines? Let’s spin in front of the TV instead. June term books to read? Jared, you read them out loud; I’ll spin.

The first proper bit of spinning to come out of this procrastination technique was… well. It’s bit me in the bum a bit, let’s just say. Karmicly speaking.

My plan with this top, a 100% BFL from Miss Babs (I think the colorway was Mountain Ridge), was inspired by this article I read on fractal spinning. I divided the top into three equal lengths, each to be spun onto a different bobbin. The first I split into a bunch of strips and spun; the second I split into three strips and spun; and the third I spun directly off the top. This made the lengths of color repeats on each bobbin different. This wasn’t precisely fractal, because the top was randomly dyed, but it did, I think, make for the maximum possible differentiation among the plies.

The karmic ouch came during plying time, my very favoritest. Some people seem to hate plying, cranking it out real quick on an electric wheel, or learning complex techniques to spin even singles so they never have to ply. But I love plying. In plying, I’m watching the fruits of countless hours of tedious singles spinning coming together. I get to see how the colors combine, how even (or uneven) the finished work is… and of course it goes so fast.

This three-ply was looking tremendous for a few yards, when quite suddenly, one of my singles ended. I think my heart stopped for a second when I saw what happened. 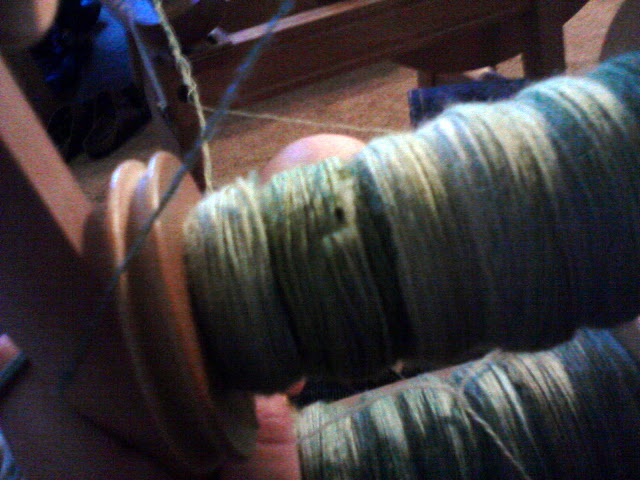 During packing, one of my bobbins must have caught on something sharp, because a whole bunch of singles had been cleanly snipped. I kept pulling bits off, but it took a while to get past the broken part. I plied as much as I could, but then one bobbin clearly had a bunch more singles than the other two. I  wound that off by hand, hoping I could ply from both ends of a hand-wound ball, along with one more single, but that lasted about fifteen seconds before degenerating into an energized mess.

The above is all the wasted singles that I was unable to spin into anything. I actually threw it out – but the next morning I pulled it back out of the trash can. Those singles are hours of my life. I don’t know what I could possibly do with them, but it was too much time and work to just chuck. Lesson of the day: When dealing with handspun singles, especially when they’re mega-energized (as mine always are), if you want a center-pull ball, use a ball winder. Geez, rebs.

Neither of these pictures are color accurate to the adoreableness that is this little skein. If you’re still reading this blog, thank you for not rejecting me for these few weeks of awful pictures. My good camera is supposed to get back today.