It’s “Mom.”  I haven’t written for a while because I’ve been dyeing like crazy and test knitting for Rebecca’s designs.  I’m not a passionate writer like her….I’d rather DO the thing, not write about it.  But I AM now a passionate spinner!

One year ago we bought “Red” and “Blondie” as you may remember.

This is “Red” who got its name because of the way I stained and finished it. I took a 2-hour lesson a few weeks later and worked hard with the combed top that came free with the wheel.  That lesson was a good introduction, but I struggled to spin a combed top.  It was slippery and I felt like I was fighting it all the way.  I spun 3 bobbins worth of yarn, but had too many questions….why was it that my spin was not very tight sometimes?  How was I supposed to fix that?  Was this good enough?  How do I spin smaller yarns (like Rebecca)?

Here is the white yarn that I spun with that white top….on my unmade bed.  (Who wants to make ones bed when there is spinning/knitting to be done?!)  The one on the right is my first attempt, the thinner one on the left is my second attempt.  It was a better of course, but like I said, I felt like I was fighting with it the whole time.  It wasn’t fun.

In March I decide to look on the MD Sheep and Wool Festival web site for classes I know they offer because you can’t take those things spontaneously on the Day Of.  I found that out the hard way!  Once when walking around the festival I walked in on a drop-spindle class and asked if I could join them since I had my spindle with me.  I was laughed out of the room in a polite fashion.  “These classes fill up in March!  Sign up early on the web site”, one kind lady whispered to me.  Okie dokie.

Several years passed before I recovered enough from that embarrassment to actually decide to take a “dumb class.”  Fine.  Whatever.  I can look and see what the heck they offer that is soooooo great.  I had a wheel I was not using, and I needed some info and some skills…..in a big way.

I found a class on the web sight taught be Maggie Casie.  “Beginning Spinning for Those Learning How or Wanting to Renew Their Skills.”  Something like that.  I went through the procedure and signed up.  Turns out that the way it works is that everyone who signs up by March 28th gets a shot at being in the class.  If it’s full, they do a lottery and the lucky ones get in.  I found out in mid April that I made it in!!  Whooo hooo!  I sent money and asked my good friend to babysit my daughter since it was 2 full days!  14 hours of instruction.  My friend was kind enough to agree to babysit Bethany and I sent in the check.  I counted down the days…..

This was my end result after the class plus 6 days:

I call it my “Rag Rug” project because my husband said it reminds him of one of those braided rugs.  The black on the right is BFL wool that Maggie gave us to start with.  After explaining how to pick out a fleece and some basic carding techniques, she thew a big, black fleece on the floor and told us to take some.  We carded and made little rolags, while she taught us a basic spinning technique, called “Woolen Spinning.”  I began and found it about 100 times easier to spin from these little rolags than spinning from my white combed top.  Oh my gosh I was grinning from ear to ear just like Matt Kuchar, the happy golf pro.  (He grins almost ALL the time, even after a bad shot!)  I couldn’t stop myself; I was giddy with joy.  We spun all the rest of the day, and we also learned all about our spinning wheel.  Eventually we made 2 small bobbin’s worth, so we could ply the next day.

She also gave us a combed top, and I wondered if she would show me the trick of this slippery stuff.  Sure enough it was harder, and again I was fighting with it.  But then she gave me some hints and taught us the difference between “short draw” and “long draw”…..it helped a lot.  I made progress.

The second day she taught us to ply and I ended up with the black skein you saw on the right.  Then she gave us some combed blue wool, and showed us a drum carder….encouraging us to mix things up.  We spun up heathered greys and mixed blues and whites….my bobbin had all sorts of mixtures on it!  At the very end, she taught us “over the fold” spinning, which was the only way I was able to spin our last big treat:  some merino/silk.  Talk about slippery!

So at home, since I had these various bits on my bobbin, I thought I would continue to be random.  My mom had given me 2 small bags of fleece in various pastel colors….all the way from Argentina.  (She had gone on a cruise around Cape Horn!  I had to look at a map to make sure it was not the other cape.)  Hence the rag rug look of the yarn.

The project seems to divide itself into 2 sets of colors.  The one above and this one below: 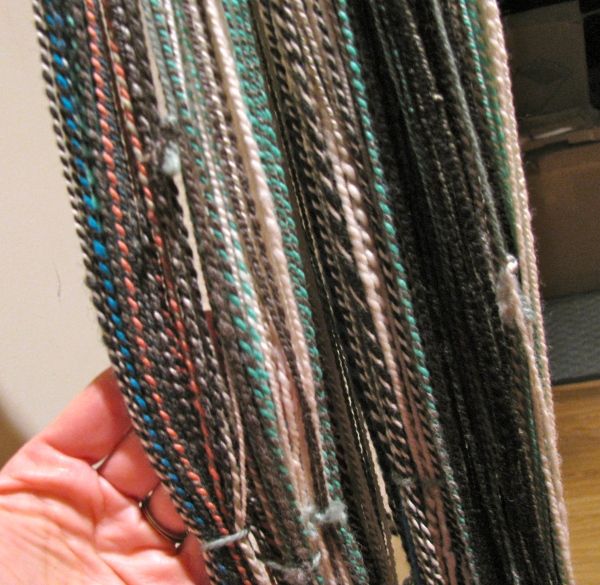 My husband and Bethany said this must definitely become 2 knitting projects.  Don’t force them together?  It’s about 550 yards total.  (My niddy noddy seems to take about 2 yards for a complete wrap.)  Do you agree?  Is there no way to make a funky vest with this loverly stuff?

Of course there were the necessary spinning accessories…..a lazy kate and niddy noddy to store bobbins and wind up the yarn when done.

And combs for Worsted Spinning, which is it turns out I like a lot because the end result is smoother and more defined.  It wastes more yarn, but it gets out more of the “goobers”- little bits of of knotted fluff.  It organizes the strands better, as Maggie puts it.

Lastly, I had to buy a new fleece at one of the state’s best fleece markets!  Rebecca and I bought this one together:  A Cormo Cross…..some kind of small crimp fleece.  It turns out that the smaller the crimps are in your fleece, the softer the yarn will turn out.

And I split a Rupert Corriedale with some buddies at the spin class.  That’s the one on the right.  The grey one on the left is my Mother’s Day/birthday gift from Rebecca!  She shared some of her fleece that she posted about earlier.  See how much bigger the crimp is on the grey one?  It will make a lovely outer sweater, but the Rupert should make something a big softer, and the Cormo Cross might make something soft enough to wear against the skin. 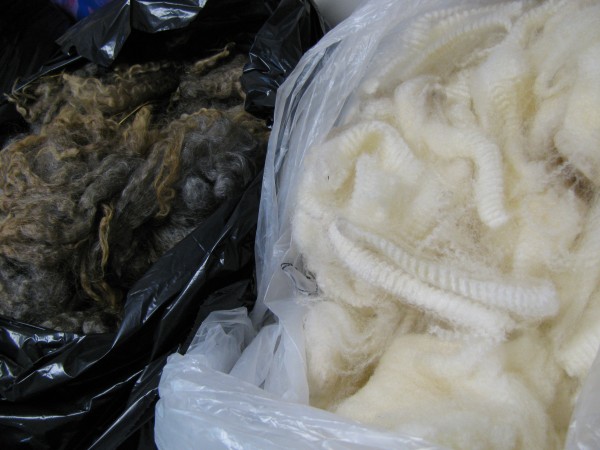 So now I’m hooked.  I am well and truly a spinner as well as a knitter.  I spun that 550 yards of “Rag Rug” yarn in 8 days!!  It’s looking like spinning enough for a sweater will not be impossible.

I put away the wheel for 2 days after that; payed bills, did the laundry.  But for Mother’s Day I started another project!  Will tell you about that one later….

One thought on “Wheel Spinning from a Passionate Newbie”