Once upon a time, I cast on a sock. It was out of a ball of Zauberball, in some gorgeous spring colors that I love to see together. It was an incredibly boring sock, but that was what I wanted: a boring sock. The ultimate in vanilla: some K2xP2 ribbing, followed by endless rounds of stockinette. This was knitting for the movie theatre, and for meetings where I want to keep good eye contact.

After a few inches, was going okay. But even for its express purpose of being boring, I was bored. Then one day, I noticed. 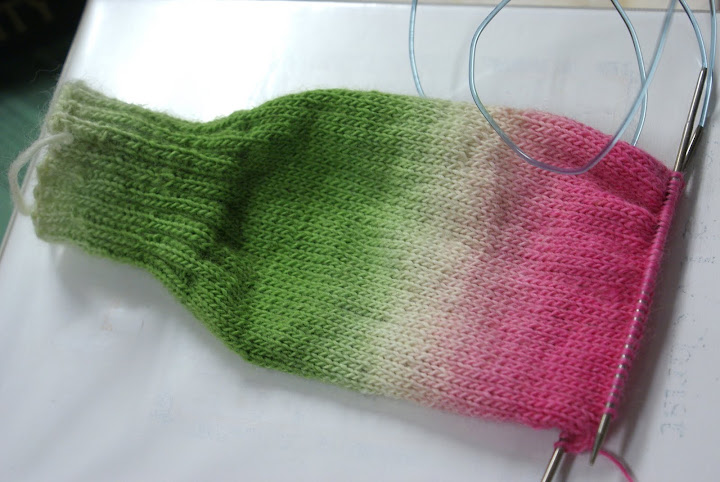 No really: the Newfoundland flag is green, white and pink. It’s like the Irish flag, but snubbing the protestants by turning their traditional orange into pink. Or something.

You might be asking yourself how the heck a woman from below the Mason Dixon line knows the colors of the Newfoundland flag. The reason is simple: there is a dude, a fellow seminarian, big burly guy, from Newfoundland. He regularly wears shirts that sport this heritage, providing me with the unusual factoid about his country-i-mean-province’s flag.

So when I realized what these colors signified, I ripped out the sock and cast on for a hat. A hat that was slightly less boring than the vanilla socks. 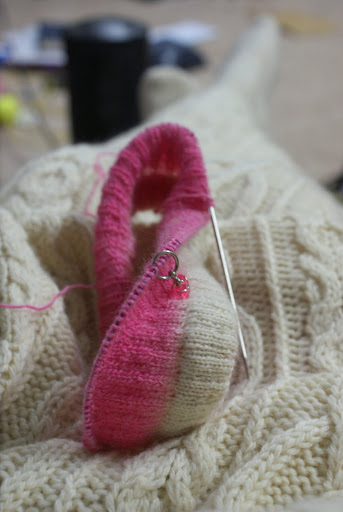 The pattern I used is a free one on Ravelry with an awkward name for a PG-rated blog. It was accurate enough, though I do not think I will ever knit a hat on US 0’s again. I exchanged the regular cast on for a folded brim, because mine just looked messy, and I only did one set of chevrons because they were tedious. Again, the point of everything in this posts was to be as boring as possible, to be knit while reading. This was knit largely while reading another book on early American Christianity; I finished it on the way to Florida, and imparted it to my Canadian brother a few weeks ago.

Nearly everyone who saw me working on this hat felt the need to exclaim, “It looks like a watermelon!” I can’t blame them. But now you know what these colors really mean, and why a big burly Newfoundlander would be unashamed to wear these colors proudly on his head. Because something that is boring to knit can be awesome to wear.

(Unless the hat is too small. Then his wife can wear it, because I’m sure not re-knitting it on US o’s.)

One thought on “The Tale of the Boring Hat”