Lilies are the Easter flower. Easter Lilies are particularly so because of their pure whiteness and distinctly trumpet-like shape. Loud and reckless without being garish, vulnerable and precious without being weak. They rejoice without fear, to celebrate the day of the year that we are to celebrate the most with unmitigated joy. When Jesus rose from the dead, our hope was realized. The battle was won. Sin and death were conquered forever. We live in the “not yet,” where that life is not yet fully realized for us, but we know what’s coming. 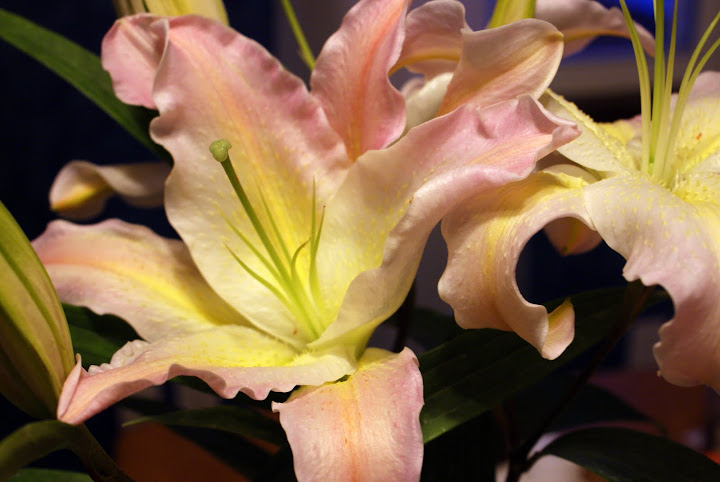 “Lilies for Easter,” expanded from the working name “Lily,” had an interesting development. It was originally inspired by a Noro yarn that I fell in love with (Noro is a Japanese yarn manufacturer that specializes in yarns that change color in slow, interesting stripes). But then I found out the yarn was discontinued, and that it had more colors in it than I liked. But I was married to the idea of a color-changing stole by that point. After weighing my options, I settled on another Noro yarn, which I’ll review below. I chose it for its softness and these colors: there’s bright pink and green, but a lot of brown and gray as well. These lilies are in their context: springing wantonly from the muddy, messy earth of early spring, from the “old eternal rocks” along the thundering shore. 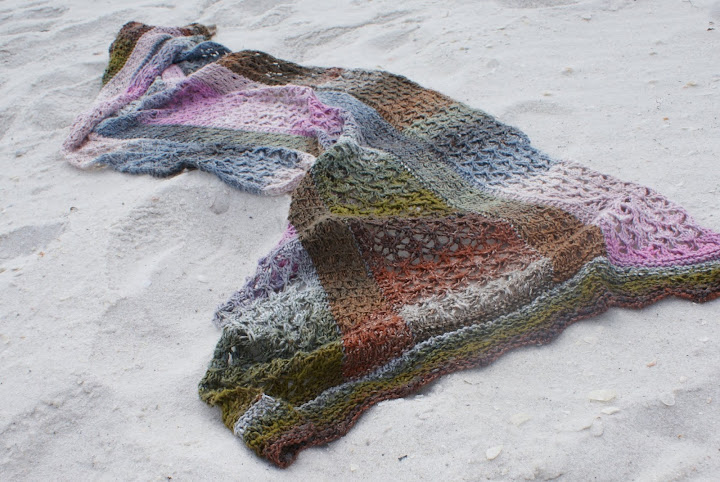 Where are the lilies, you ask? They are not large and garish, but small and many. This was partly a practicality of design – I was tired of fingering-weight projects, so I wanted a nice, thick worsted-weight cotton blend. Any motif in such a yarn would have to be small, so as not to look ridiculous. Do you see the tiny lilies in the panel below? I see the decreases forming petals. When I look at the finished piece, I think of the chorus of billions that will be resurrected with Christ on the last day, when we are scooped out of the grave and re-formed into glorified bodies, worshiping forever in the Kingdom of Heaven. That’s the full realization of what Jesus did for us this day, just under two thousand years ago, just outside Jerusalem. The piece is in five panels – three panels of lilies interspersed with two panels of what I think of as “leaves” (below). The lily panels are knit from the center out, and the leaves from end to end. 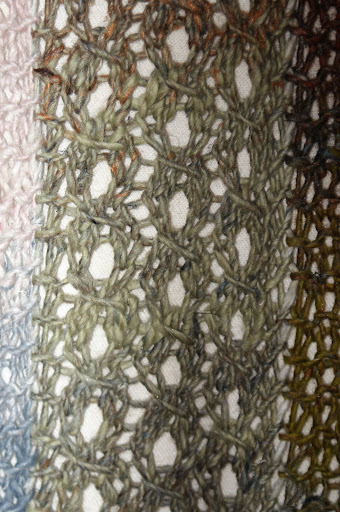 These changing directions, starting with different colors, get the maximum play out of the color-changing yarn. But, because I know lots of folks will not want to use a color-changing yarn, and no one likes seams unless they are necessary, I’ve included in the pattern a version where the center is knit in one piece. Both versions have been test-knit. 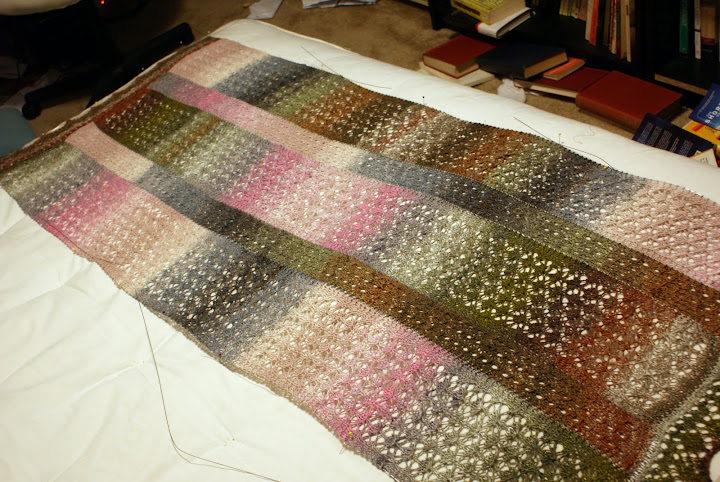 Yarn Review: Noro “Aya” is a blend of 50% cotton, 35% silk, and 15% wool. These were carded together then spun into a singles yarn that is soft and gentle on the fingers, while maintaining the lightness that will make this a perfect summer stole or wrap. This yarn comes highly recommended by someone who pretty much hates cotton. I used color 12. With 6 balls, it was not difficult to find enough different and matching ends to achieve my goal of mirroring the stripes on the lily panels.

I usually wear it as below, though of course with a stole this size you have several options. You can imagine my delight that we found ourselves on a beach last month, so we could do a little photo shoot like the ones in the fancy magazines. It was cold, and my camera battery was dying, so we were a bit rushed. But we got some shots. 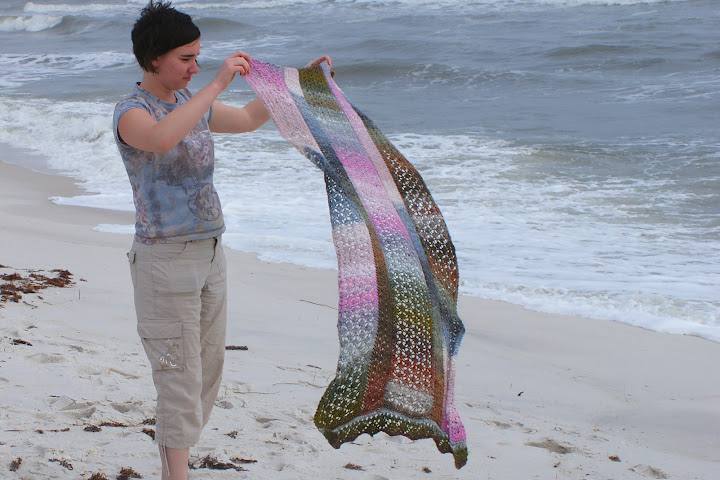 I hope you have a fabulous celebration of this most high and holy day. After three days in the tomb, after the darkness, the black and purple, the fasting, and the penitent remembering of sin, this is the day to cut loose. I go to a very formal-ish church, but I will find some aisles to dance in. Our house will gather around a leg of lamb and other simple extravagances. And I will drive around all week pretending to be Keith Green. 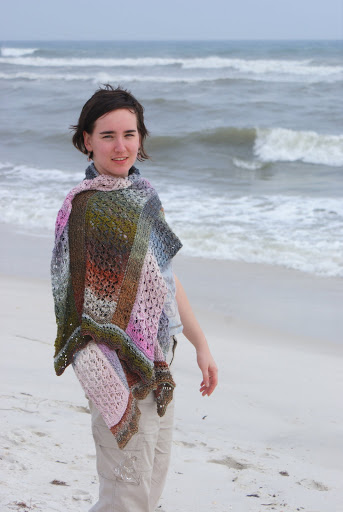 Should you like to join in this season of celebration by knitting “Lilies for Easter,” it is now available on ravelry, and has been sent to subscribers. And a big thank-you shout-out to Donna and Jen, the test-knitters for this project!

4 thoughts on “Behind the Design: Lilies for Easter”