So yesterday, you got the pretty tale of Rose of Sharon: symbolism and style, with which I am immensely pleased, and for which I am immensely grateful, get thou not me wrong. But this was probably the most difficult design I have ever completed, and today you get the Rest of the Story.

The first struggle with this pattern was acquiring the yarn. I was determined to use Madelinetosh’s Tosh Merino Light, which even after this struggle I think may be my favorite yarn in existence. But I really wanted a particular colorway, and I wanted to support my local yarn shop (and place of employ), so I put in an order. In July. 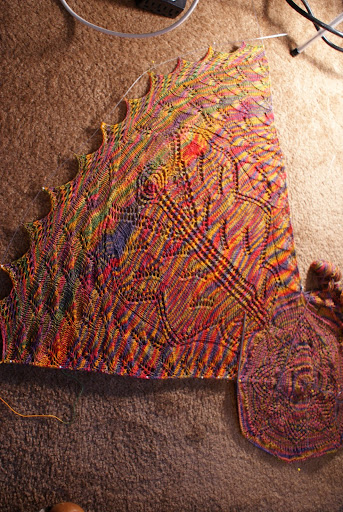 I know. Try not to vomit. (Recognize the yarn, Jonica? I promise I’ll knit it into something actually pretty.)

The company kept pushing back the estimated arrival date, and October came and went. Halfway through November, I knew I couldn’t afford to wait any longer. Nowhere on the internet had the colorway I wanted, so I caved and went to Jimmy Beans for help. I ended up ordering the colorway “Rose,” which is not only more thematically appropriate for the shawl, but in fact prettier.

By this time, it was so late that there was no way I was going to finish a proper sample in time to get it to my test knitters to knit separately. So I contacted them, and they signed on to the ridiculous task of knitting it along with me – starting halfway through December, giving up precious knitting time during that worst of knitterly crunch seasons. My task was to stay one step ahead of them, sending out bits of pattern as I completed them, and trying to keep corrections straight. The version files on my computer tell me that we went through at least eight official iterations, and I don’t know how many corrections. It was like our own little private knit-along. They were up to it (one despite a serious family illness), and performed beyond my greatest hopes. Between the three of us, I think we ended up with a pattern that is actually clear, despite being 23 pages long and including one chart that is five pages wide. (With accompanying written directions. Really, we did that.)

As we went, the thing kept growing. What I had originally advertised as a “shawlette,” requiring 800 yards of yarn, soon required 1200… and with twelve rounds to go, I realized I would need a fourth skein. Through an incredible trick of providence, this was around the time that my original order finally arrived at Yarns Unlimited, miraculously including four skeins of “Rose.” I snagged one the moment it came in the door, and finished the last leafy border bit on the first day of Jan terms.

You know that nagging feeling that something isn’t quite right? That you ignore because you know there’s nothing you can do about it?

I blocked the finished shawl on the futon, and oh, how I loved it. I dragged Jared outside to take pictures during a blustery snowfall.

But there was no denying it. Something was wrong. The center of the shawl was… sagging. I had doggedly hoped that a severe blocking would fix it, and it did for a little while, but soon the knitting relaxed. You can see it even in this immediate post-block picture: 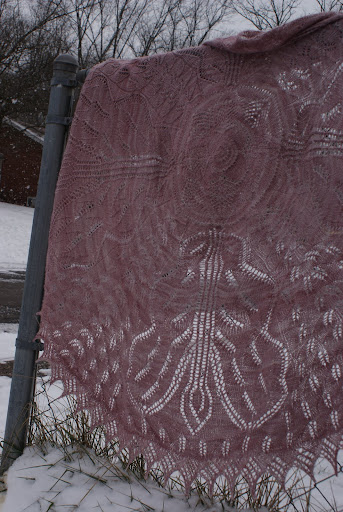 There was no getting around it. My shawl had grown a boob.

This was not okay.

It didn’t take long for me to figure out what had gone wrong. After the center section, I switched from pi-style increases to integrated increases, but I’d included one last “pi” section before starting the integrated increases, when I should have started increasing right away. In other words: I did it wrong. If it was just something I’d made for myself, I could have ignored it, but this was a straight-up design flaw that I could not in good conscience offer for sale.

What was I going to do? I could re-design it easily enough and just take out the offending rows, but I’d probably have to change them without test knitting (against my policy, since that never ends well), and besides, my sample wouldn’t look like the finished project without re-doing a good 80 hours of knitting. After two nights of tossing and turning, between weeks of intensive January classes, the lightbulb came on. All I had to do was choose rows to remove that had the same number of stitches, and I could remove them not only from the pattern, but from my shawl.

So on another blustery evening, I found two US4 circulars among the detritus on the coffee table, and threaded them oh-so-carefully through two rows. They framed what I call the “Donut of Offense,” that ring of thirty-some rows that Should Not Have Been. I cut the yarn below the top row and picked out the row below, leaving live stitches, then ripped the DoO to oblivion. 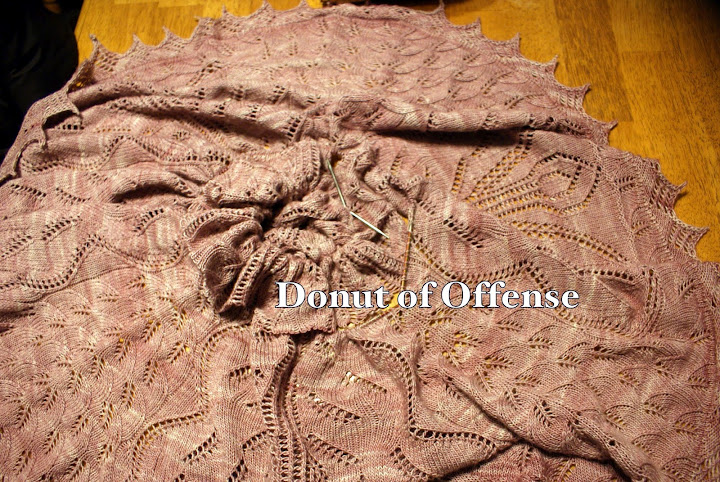 Then came the Longest Grafting Job Ever. I have to credit this at least a little bit to the Holy Spirit, but it worked out perfectly. I even managed to graft the purls into place. 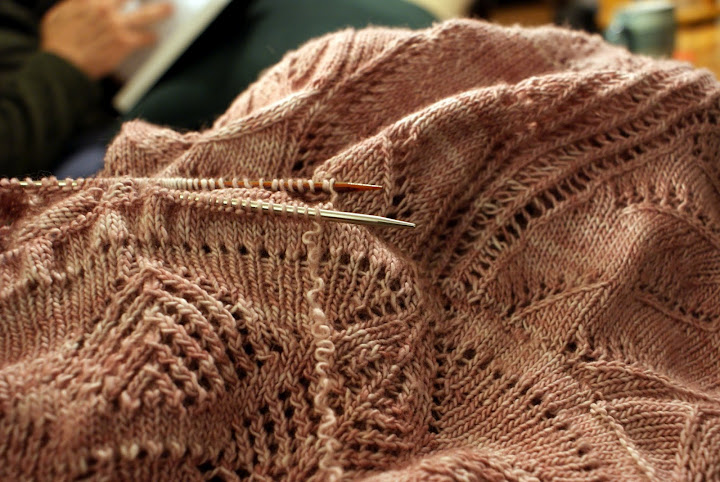 I blocked it again, and now I have a shawl that matches the adjusted pattern perfectly. And  You can sort of spot the irregularity in the grafted row, but I think it’s pretty well perfect. Spot the line below, if you can: this is my favorite picture in the world right now – the shawl splayed out in front of the sunset in the study window. 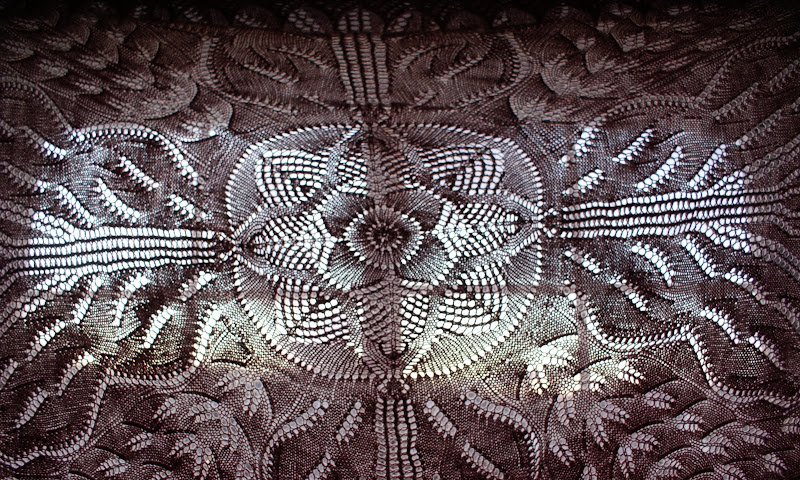 Lessons learned: 1) Madelinetosh is fantastic, but order it when it’s in stock. 2) Solid test knitters are worth their weight in cashmere, and I hope one day I make enough off these patterns to pay them accordingly. 3) I should trust my instincts, not logic built on a distinct lack of experience. 4) Despite everything, circular shawls are still about my favorite thing to knit.

5 thoughts on “Behind the Behind-the-scenes”