Good morning! I know it’s two hours after noon where I am, but on the day after two weeks of Jan terms have been completed, that totally counts as morning. I had a blast, I learned, I laughed, I read, I wrote, I had deep thoughts. And, of course, I knit. Oh, how I knit. Goodness; I haven’t shown you a single thing I’ve cast on (or off) since Christmas! I’m going to start small, so I don’t overwhelm myself as I get back in the swing of blogging.

I’ll start, in fact, with a piece that came completely out of the last two weeks and the 80 hours of classroom time therein. Jared & I did succeed in walking to school, at least one direction, every day of class (except one when blisters prevented me). This has been fabulous; every day I walk I feel healthier and more cheerful, and this time I don’t think it’s just out of some sick sense of earned self-worth. However, it’s left me in a fashion dilemma.

Walking to school in the deadly cold (the second week has come laden with snow) means I have to walk bundled up. I am well-equipped for such a task, and don’t leave the house without multiple layers of wool around my neck, face, and head. But this means (a) I don’t really want to wear makeup which will rub off on my scarves and cowls and get all nasty, and (b) I have horrible hat hair every day. Since I am unwilling to carry an apothecary on my back, I have no solution for (a); though I’ll take other suggestions. To solve (b), I’ve just been wearing hats all day, every day. But hats that suffice to warm both head and ears during a January sunrise are not the sort that you wear just to look cute. They mostly make me feel like an surfer who moved to Colorado to learn snowboarding: out of place, sloppy, and androgynous.

But on Friday of week 1, the only other woman in the class was wearing a hat that solved this problem completely. It was thick and warm and ear-shielding, while being cute, feminine, and belonging in a real outfit. It was a cloche. Of course! A cloche! I had to have one. Specifically, I had to have this one. 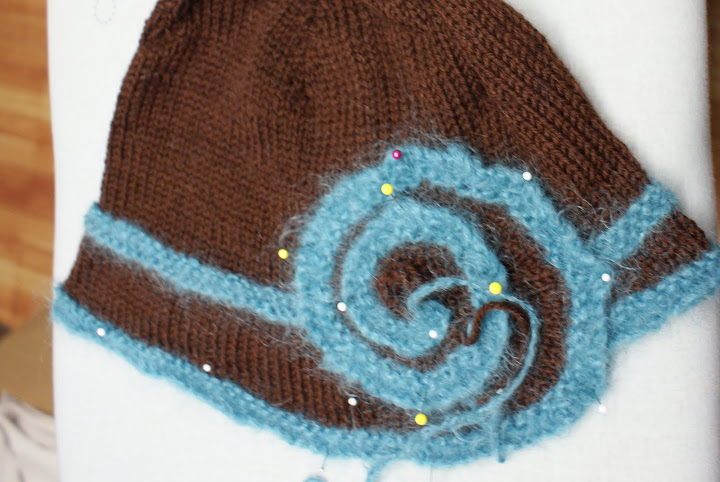 I dug out a pair of yarns from the neglected corners of the stash on Friday night, knit it up mostly over the weekend, finished it early on Tuesday (one of those insomniac mornings which I redeemed by knitting and reading Arts and Letters Daily. I felt cultured), let it block over Wednesday and Thursday, sewed it up Thursday night, and wore it Friday to much comment. 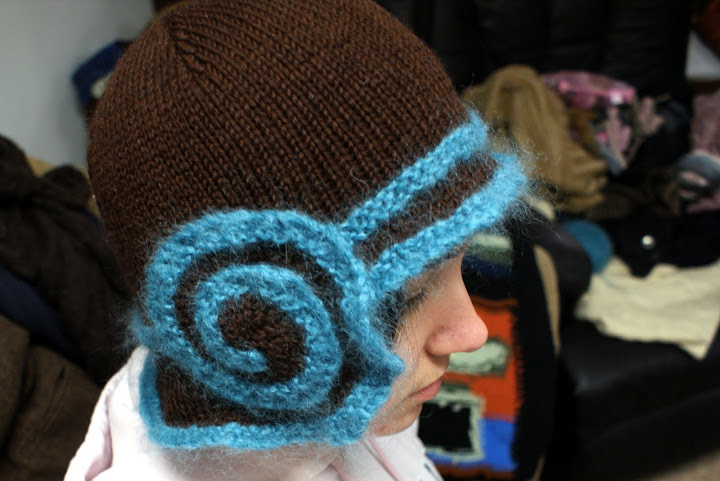 (I assure you that I did not look quite this unkempt on Friday, though I really need to get on this whole makeup thing.)

I love it. I want to make four more and wear a different one every day of the week. Next time I’ll curl the spiral up better; I don’t think it’s supposed to wave like that. The pattern was one of those annoying things that is both boring but attention-requiring, because you have to do lots of short rows and counting amidst all the stockinette. But it was quick, and worth it. 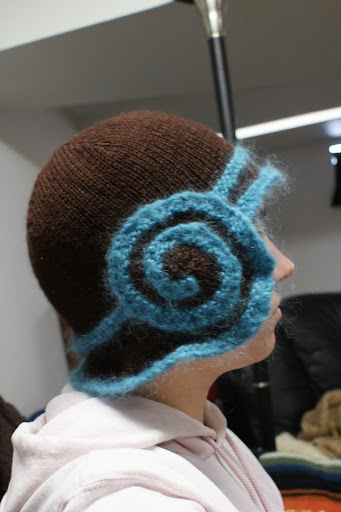 Of course, I’m not sure I’m wearing it exactly right. If there were spirals on both sides of the hat, I would look irredeemably Princess-Leia-cinnabun-esque.

Addendum: Since every person on the internet has been talking about SOPA and PIPA this week, I thought I’d add my comment. I tend to be a little cynical about politics (a little?) and slow to get behind these movements that sweep the internet. But I at least have a fantasy of being one of those people who make something like a living by providing internet content, so it seemed my due diligence. This morning I ran across this comic which described the last week more or less perfectly. Mostly I’ve been enjoying watching the hoopla.