Some friends of ours were expecting a baby. We were all happily awaiting her arrival at the end of what had been a very normal pregnancy – an almost identical pregnancy to the one before. Since so many things about this baby were in precise imitation of her older brother, they were surprised that she did not follow in coming a bit early. The due date came and went, and the family got more anxious. I wasn’t worried – babies come when they will, and I think I was like a month late. (The dad did not appreciate this information).

Then I realized… Of course she hadn’t come yet, because I hadn’t finished her hat. Oops.

Some knitters, it is said, have special powers. If they start knitting something for a baby, the baby won’t come until its knitting is finished. I didn’t have any aspirations of joining this select force, but it’s held true – no baby has come in the middle of me knitting for it.

I turned on the steam, and thought I had finished. This hat was inspired by a conversation with the dad about how pink clothes for girl babies get OLD, and how he wanted to make a boutique baby store called Gothbaby.com. Turns out this has been done, but my morbid sense of humor does not include a onesie with a pentacle. My idea of sticking it to the pink pastel system is more like steampunkbaby.com, with a liberal use of black. Hence, a little black hat in fingering weight wool with a seed stitch border, a little lace edging knit separately and sewn on, and a button just to say I did. I consider this my very small contribution to feminism.

But she still didn’t come. I looked hard at the hat, and wondered why it wasn’t to baby’s satisfaction. It took seconds to realize… in my thorough enjoyment of the placid work of stockinette stitch in the round, I’d made the hat too long. Baby was probably offended that I thought she was a conehead, and I couldn’t blame her. So I ripped out the crown and a further inch of hat, re-did the crown, sewed in the ends, and left it in her dad’s mailbox to find the next day. 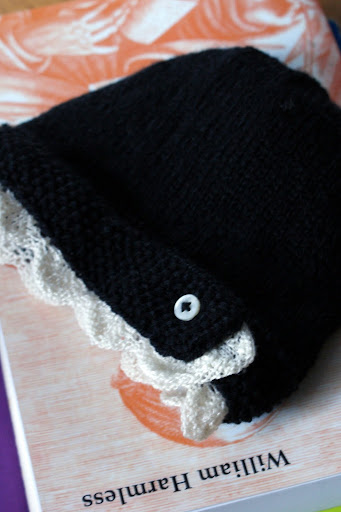 It still took Alex another 48 hours from bind-off to turn up. I think she was giving me time to block it. (I didn’t; don’t tell her.)

Cute like a button, eh? Moral of the story: babies are great, and I like knitting for them, but be warned. If you want something knit for your expectant arrival, you are putting the date of your baby’s birthday in my procrastinatory hands.