~by Rebecca Osborn. [So far, I’ve spared you any academic writing, but that ends today. I was so fascinated by a class discussion in my Systematic Theology class that I decided to make that topic my last paper. Since it fit so well with our last week’s topic, I decided to write it in time to share with you. So I give you this draft, which will be updated with corrections as I am corrected by those wiser than myself.]

Jesus’ return is a fact with which all Christians must wrestle. The subject of eschatology is one on which Christians have had virulent debates (sometimes very uncharitable ones), causing some others to develop a fear of discussing it altogether.1 However, the central truths of Jesus’ second coming, on which all Christians agree, have so powerful an impact on Christian faith that they cannot be avoided. The definite expectation of Jesus’ return in judgment must drive Christians to our knees at the foot of the cross and inspire us to the obedient good works with eternal significance.

While the timing of the final judgment and the precise events surrounding it are hotly debated, nearly all Christians agree that the Bible teaches that Jesus will return to judge the world.2

More than any other subject, Jesus preached about the Kingdom of God. The meaning of the term “Kingdom of God” is complex, but can best be stated as “the kingly rule of God.” There is a tension in Jesus’ use of the phrase, demonstrated through his life and ministry, between how much of that kingly rule was being established with his arrival, and how much was yet to come. This tension means that, while this Kingdom was breaking into the world through Jesus, particularly through his acts of healing and exorcism, his teachings concerning the Kingdom of God are ultimately eschatological.3

More explicit discussion of Jesus’ second coming fill the New Testament.4 A few examples will demonstrate. First, in John 14:3, Jesus says specifically that at some time after he leaves them, he will return to take his disciples to be with him. Second, in Acts 1:11, when the ascension actually occurs, angels inform the watching disciples that Jesus will return the same way he left. Third, in Matthew 24-25, Jesus offers an extended teaching about his return, with attached parables about the final establishment of the Kingdom of God. This means that Jesus’ teachings about the Kingdom of God are not mere metaphors for how Christians ought to live. They are teachings about how to live, but in light of Jesus’ return and the final and complete establishment of God’s kingly rule.

In Scripture, Jesus’ return is strongly associated with the final judgment. In Jesus’ teachings, this is primarily discussed in parables, such as those of the ten virgins, the talents, and the sheep and goats in Matthew 25. Jesus associates his return with his final judgment even more plainly in Matthew 16:27: “For the Son of Man is going to come with his angels in the glory of his Father, and then he will repay each person according to what he has done” (ESV). According to Alister McIntyre, the discussion is even more explicit in the apostle Paul’s letters, for whom “there is an intimate connection between the final coming of Christ and the execution of final judgment.”5 Despite many modern theologians’ attempts to demythologize or allegorize Jesus’ return, the Bible clearly teaches that Christ’s return will by real and embodied. At that time, all people will all experience a bodily resurrection6 and at that point the final judgment will occur.7 This is not a view on the extreme edges of the faith, but a truth which every Christian committed to the truth of the Bible must face.

On Our Knees Before the Cross

How will the Christian respond to the knowledge of the coming judgment? To hear that “when God’s righteous judgement will be revealed[,] He will render to each one according to his works” (Rom. 2:5b-6) is not a comforting thought, since “No one is righteous; no, not one” (Rom. 3:10). Martin Luther was terrified of Christ the Judge, pictured in late medieval art as seated on a rainbow with a lily and sword.8 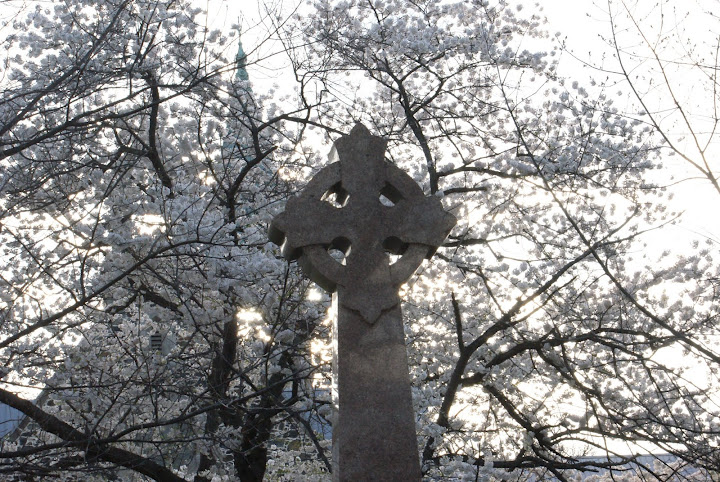 Certainly, a healthy fear of God is the beginning of wisdom (Prov. 1:7), but to stop at that fear is to forget that, in that final courtroom, Jesus will not only be seated in the judgment seat. Jesus will also be sitting in the place of the condemned, having offered himself as the perfect sacrifice to take away sins (Heb. 10:12-4). This is the doctrine of justification, that Jesus is not only the judge, but was also judged on our behalf. When the believer sits before the judgment seat, all the believer’s guilt will lay on Jesus, and all Jesus’ righteousness will lay on the believer. Thus, “there is no condemnation for those who are in Christ” (Rom. 8:1). As summarized in the eleventh of the Thirty-Nine Articles of the Anglican faith, “We are accounted righteous before God, only for the merit of our Lord and Saviour Jesus Christ by faith, and not for our own works or deservings, wherefore that we are justified by faith only is a most wholesome doctrine, and very full of comfort.”9

Saved but Judged: Inspired to Obedience

Yet, while there remains no condemnation for Christians, this does not mean that Christians will not face that judgment. Paul does not qualify his prophecies of the final judgment, but says God will render to each one according to his works. 1 Corinthians 3:11-15 describes this most clearly:

For no one can lay a foundation other than that which is laid, which is Jesus Christ. Now if anyone builds on the foundation with gold, silver, precious stones, wood, hay, straw – each one’s work will become manifest, for the Day will disclose it, because it will be revealed by fire, and the fire will test what sort of work each one has done. If the work that anyone has built on the foundation survives, he will receive a reward. If anyone’s work is burned up, he will suffer loss, though he himself will be saved, but only as through fire. (ESV)

It is easy to think that, since Jesus paid for sins, that means the actions of the forgiven person are not important. Ultimately, works have no direct impact on salvation. However, James 2:14 makes it clear that “faith without works is dead.” To put it more positively, the twelfth article of the Thirty-Nine Articles states that “good works … do spring out of a true and lively faith10. This is the Christian’s primary motivation for all good works: gratitude for the gift of Christ.

However, a sober acknowledgment that all works will be judged can be spiritually useful. This final judgment matters for the Christian because there exists more to eternal life than “getting saved.” Jesus took the punishment for sin, but he did not erase all human sin from history as if it never happened. The actions of Christians have a direct impact on eternity in two ways: for others and oneself.

As concerns others, Christians have a direct impact on who will be with God in his final Kingdom. How the Christian obeys or fails to obey God in bearing witness to Christ will be forgiven in the final judgment, and the Christian must trust in God’s sovereign grace to work in spite of (and through) human weakness (e.g. 2 Cor. 12:10), but the real impact of human failures within the human story will not somehow be retold. For example, Paul explicitly connects Jesus’ second coming, his judgment, and the task of preaching (2 Tim. 4:1). The responsibility of spreading the gospel to the current generation of people living on earth rests with the contemporary generation of Christians, because “How then will they call on him in whom they have not believed? And how are they to believe in him of whom they have never heard? And how are they to hear without someone preaching” (Rom. 10:14)? The fact that Christians are called to a mission with such eternal significance is what drove missionaries like Amy Carmichael, who spent her life in India so that she could build with such “gold, silver, precious stones.”11

As concerning oneself, one’s actions on earth have an impact on one’s role in the Kingdom. For example, Jesus also spoke of a particularly great reward in heaven for those who suffer persecution for his sake (Matt 5:12, Luke 6:23). It is difficult for Western Christians in a consumerist culture to imagine some people having a greater reward than others. “Laying up treasures in heaven” (Matt 6:20) sounds too much like laying aside money for a relaxing retirement, and it is difficult to think of any benefit that is not connected with status or wealth. Indeed, the parable of the workers (Matt 20:1-16) reminds the reader that God gives the same generous gift of his presence to all who come to him. But the Kingdom will fit neither a consumerist model nor an individualist model, since most of Jesus’ metaphors for heaven are communal.

This is difficult to understand, and involves some amount of speculation. One possibility is hinted at in the parable of the talents, in which Jesus paints a picture of responsible stewards, who are given more responsibility upon the master’s return (Matt 25:10-30). Whatever adventures are in store in the fully established Kingdom, one’s role on earth may have something to do with the role one plays in heaven. One can see how this might work out when Paul says that “we are to judge angels” (1 Cor. 6:3) and when Jesus says that his twelve disciples “will also sit on twelve thrones, judging the twelve tribes of Israel” (Matt 19:28). Another possible aspect is demonstrated in C. S. Lewis’ famous little book, The Great Divorce. He imagines that who one was on earth directly affects who you are in heaven, and how much you can even stand the glory of God’s presence.12 When Jesus says, “If you keep my commandments, you will abide in my love” (John 15:10), could he not just as well be saying that in order to able to abide in his love, one must obey his commandments?

In conclusion, Jesus saves us from the effects of our sins, but he does not take away meaning from our lives. In fact, he has given us a mission with eternal significance, giving us the privilege of continuing the work that he began on earth. This is how there can be no condemnation, but how we live impacts not only the world, but eternity, during this season God has set aside for repentance and the spread of the gospel.

9Qtd. in John H. Rodgers Jr., Essential Truths for Christians: A Commentary on the Anglican Thirty-Nine Articles and an Introduction to Systematic Theology (Manuscript ed.), 149.

For further reading: Justyn Terry, Dean President of my seminary, wrote a book on Jesus as both Judge and judged. He is an excellent chap, so I think you should go buy it. Of course you can get it from amazon, but if you ring up Trinity’s bookstore, you’ll get a copy that has love included. On the topic of the final judgment, all my sources for this paper were chapters from systematic theology readers, and they were all really good. I got a lot of mileage out of both Wayne Grudem’s Systematic Theology and Millard Erickson’s Christian Theology.

One thought on “The Final Judgment: Why it Matters”