I love charts. I use them almost exclusively. I have no problem with written directions; I do not think them inferior, nor do I have any negative opinion about knitters who rely on them. Written directions are indispensable for knitters at different levels of chart-reading, so I always provide them. (I also always test-knit them – however, it’s very very difficult to make them perfectly accurate, because unlike a chart, they don’t visually cohere for the proof-reader. Hence all the errata turning up. Blegh.)

However, I so love charts that I would hate for someone who could use them to be prevented from using them because of fear, intimidation, or frustration. I think they are useful in different ways for different people, and only your experimentation can determine how and if charts will be useful for you.

But many a beginning chart-reader is enormously frustrated. What do all these stupid symbols mean? How does it tell me what to do?

So I have attempted to construct a basic tutorial on how charts work, and the most basic ways that they are useful. If any of it is over your head, let it fall out the other ear and don’t let it bother you. This is one of those subjects where if you really need help, you should get a private lesson, so that someone can say it to you multiple different ways until you find the explanation that “clicks.”

First, three Rules for reading charts. These things are always true, and if you don’t know them you might as well make all your chart pages into paper airplanes, because they will do you no good.

Rule #1: Charts are always read bottom-up. Meaning you read the bottom row first, then the next one up, so on and so forth.

Rule #3: When working flat (back and forth), charts are read from right to left on the right side (RS), and from left to right on the wrong side (WS). When working flat, most of the symbols are flipped, so make sure you read the key:

Rule #4: All charts have a key: an explanation for each and every symbol. Make sure you familiarize yourself with which ones switch between RS and WS, if you are working flat. Symbols are not the same between patterns, so don’t assume you know what they mean.

Now come the tips – things I’ve picked up about using charts through the years. These you may take or leave, but if you follow the above rules, you will be able to use a chart and figure the rest out for yourself.

Tip #1: Charts are generally meant not only to tell you when to do what stitch; they do this, but they also serve to give you a picture. Even before you know exactly what all the symbols mean, when you look at a well-made chart, you should be able in some fuzzy way to see a shape.

For example, in the portion of the Lenten Scarf clue #2 chart shown below, you should be able to see a left-leaning slope coming out of the bottom right side of the picture. Then, partway up, it splits to a thick column going up and a thinner, more dramatic slant that continues leftward. 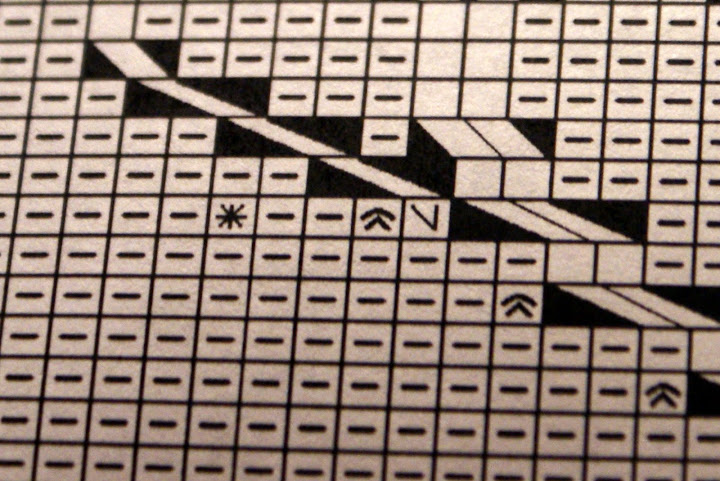 If you can get just that general sense of shape out of a chart, it has already been highly useful to you. Even if you only use written directions to know what to do, when you finish a little section like this, you should be able to more or less recognize that same shape in your knitting: 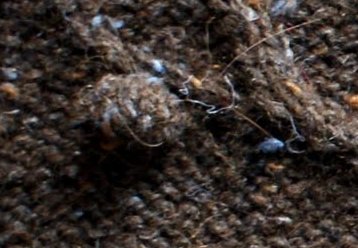 Can you see how the shapes match up?

Tip #2: A knowledge of the symbols in charts helps add to this general knowledge of shapes a specific sense of texture. For example, all of those dashes that take up much of the chart section shown above are purls. All those purls can mean only one thing: reverse stockinette stitch. A whole bunch of knits together means stockinette. Knits and purls interspersed checkerboard-style (like in clue #5) indicate seed stitch, and columns of knit and purl side by side mean ribbing. Etc. ad nauseum. This will help you look at a chart and be able to picture the final product. Similarly, cables should be drawn so you get a sense of how the “knot” ties together.

Tip #2 caveat: No matter how well you know charts, you always get to be surprised. This is one of the thing I love about knitting: discovery. Do you notice the asterisk symbol near the middle of the chart section above? According to the key for this chart, this indicates a bobble. It looks very unassuming on the chart, but it shows up as a huge lump in the knitting. In a similar way, those funny little chevrons with hats running along the left side of the slope do not seem to show up at all in the final knitting. They are P2togs, which serve a purpose, but which are meant to be unobtrusive in the final product. SO, While a chart gives you a SENSE of SHAPE, it does not do so PERFECTLY. This is partly because a grid can only be a grid, and knitting can get more complex than a grid can show – fabric can bend, curve, and flow in and out in ways that grids can’t without becoming a great mess. But this is also because of rule #5.

Tip #3: [this is very much IMHO, so don’t be mad if you disagree.] The primary usefulness of a chart is to show how individual stitches relate to one another spatially: most importantly, the vertical spacial relationships between stitches. In other words, knitting happens on a sort of grid. Every stitch has a stitch that is to the right of it, to the left of it, below it, and (most importantly) above it. A chart shows you this. (When you get into cabling and lace, you get into the additional relevance of diagonal relationships, but I’m not going to go there.)

For example, take the below chart of clue #1, and the C1RT stitch badly outlined in pink. (or coral. who cares.) 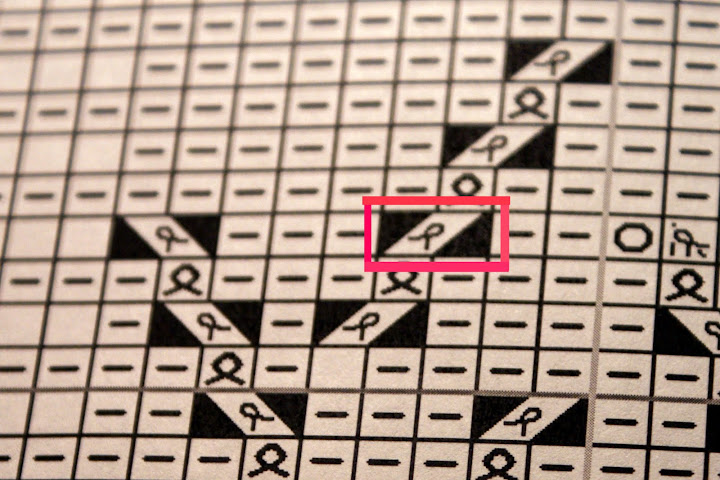 The chart tells us loads of things about that C1RT. (a) It is part of a larger shape, a one-stitch line of twisted stitches slanting gently to the right. (b) it comes two stitches after a yarn over (it’s that circle two stitches to the right). But perhaps most importantly, (c) we see what stitches are below the C1RT. We already know, from the key, and from the fact that the stitch takes up two blocks, that this C1RT is composed of two stitches crossing over each other. The chart shows us that it is composed of the twisted stitch from the previous row (the loop to the left directly under the C1RT) and the purl next to it. How is this relevant? It means that when you go to make this C1RT, you have an immediate self-check: If you are not crossing that twisted stitch from the previous row rightwards over a purl, something is wrong. You don’t have to go on for ten rows until you notice something looks funny – you can tell right away.

Tip #4: It’s because the primary purpose of charts is to show stitches in relation to each other vertically that you sometimes see blacked-out squares on a chart. If these have any designation at all in the key, they are designated “NO STITCH.” Because of increases and decreases, particularly in charts for lace or complex shapes, sometimes a designer (a) has to sacrifice showing you a perfect horizontal spacial relationship in order to show you a critical vertical spacial relationship, and (b) because knitting is more complex than a grid, and a grid can’t perfectly show how the shape of a fabric when stitches appear and disappear. It can give you part of that shape, but not the whole picture. For example, I recently used a chart with loads of blank spaces surrounding several leaf shapes. It was helpful for me to see the vertical stitch relationships in order to make the spine of the leaf shapes, but it couldn’t show me that the leaves were curvy (and didn’t need to).

[p.s. I know there are no blacked-out squares in clue #5, so don’t be confused. This is just fyi.]

Tip #5: It can help loads if, as you go up a chart, you use a piece of paper or highlighter tape to keep track of where you are. The obvious reason to do this is that it helps you keep track of what row you are on, without constantly having to trace over from the side of the page, or keep notes or something.

However, I think one of the lesser-known useful things this does is tell you what shape you should be seeing so far. It might be hard to tell, if you’re partway done the chart section above, exactly what your row should look like. Because, frankly, it’s not going to look like that until it’s done. But you can see exactly what it should look like right now if you put a piece of paper right above the row you’re working on: 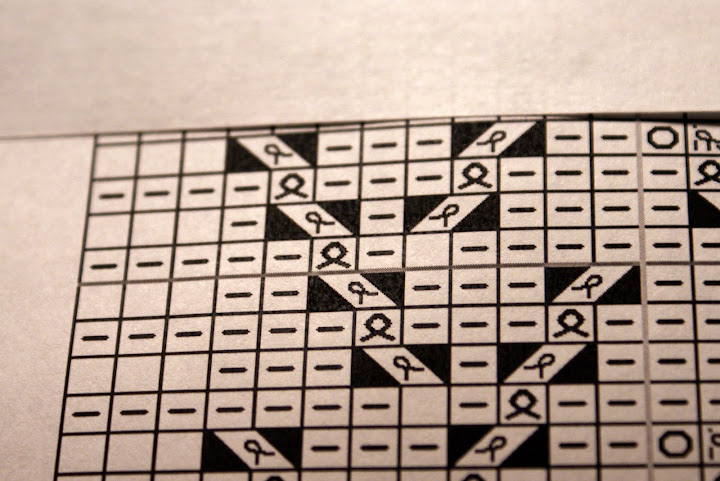 You should see those shapes match up perfectly. Again, this helps you see right away if something doesn’t match up, so you don’t have to do ten rows then realize you’ve knit something that resembles the chart in much the same way that a bullfrog resembles a chimpanzee. 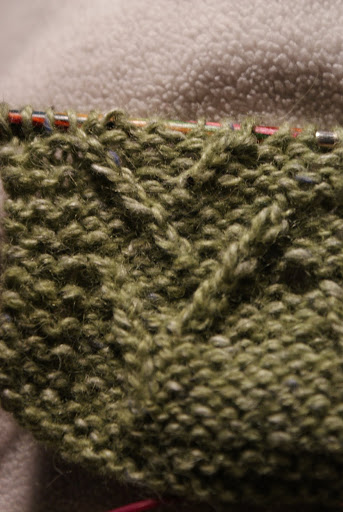 Tip #6: When in doubt, just knit the squares as they appear without worrying about all this spacial stuff. Particularly with complex lace, I found I just had to do the stitches, because I didn’t know enough to see how their spacial relationships made sense. When you’ve obeyed for a few rows, stop and see if it looks sorta like the flow of the chart, or like a picture of the finished product. Just by doing this, you can teach yourself what those spacial relationships should be, if you are patient.

One thought on “Chart-Reading Basics”