I had intended for this to be a Mardi Gras post, but I put it off for a very good reason. After a long couple of days of hard work (two 6-page papers in 24 hours. What!), I realized I was going to blow off my friends’ invitation to go out for a good time…. so I could blog. I decided that might be morally reprehensible, so I went out. (Tuesday nights at Texas Roadhouse, baby. Half price appetizers and martinis waaaay too cheap to get us as drunk as we look at this picture.) 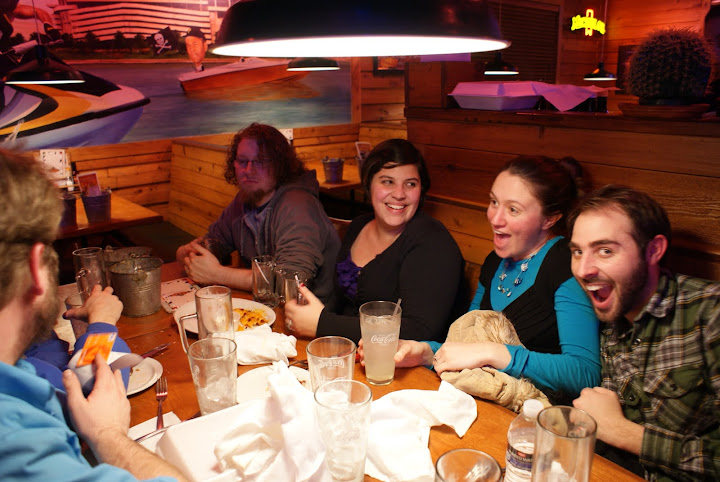 Mardi Gras, as you probably know, is French for “Fat Tuesday.” Why fat? Back in the Olden Dayes, everyone every Lent gave up foods that were considered “luxuries.” This meant meat, fat (oils), eggs, etc. Since these things would go bad if not used, folks would throw a big party to use up all these things. Funnily enough, an easy way to use up most of these things is to make pancakes, a tradition which I think is particularly English (and therefore Anglican.) Hence the Mardi Gras Pancake dinners you see sprouting up everywhere on Ash Wednesday Eve.

The other name for Mardi Gras, particularly in Anglican circles, is “Shrove Tuesday.” “Shrove” is a passive form of the Ye Olde verb “to shrive,” which means to confess sins. Hence, “Shrove Tuesday” is when we do the big pre-Lent confession, and are “shriven” of our sins. It sounds enough like “shave” to me that it conjures an image of being violently stripped of those things we love most, leaving us a little raw, with our sins exposed to the air and ready to be dealt with.

“Shriven” was the word of the day as I prepared for my Lenten knitting fast. After knitting until six minutes to midnight (of course. wouldn’t you?) I pulled out a Big Sad Box, and one by one pulled each active project out, photographed it, packaged it back up, and dumped it in the box. It was my own little depressing Mardi Gras Parade – you can even find green, purple, and gold in there without looking too hard. Here are the things that went in:

-A pair of toe-up magic-loop socks I was knitting along on as I taught Anne to make them, 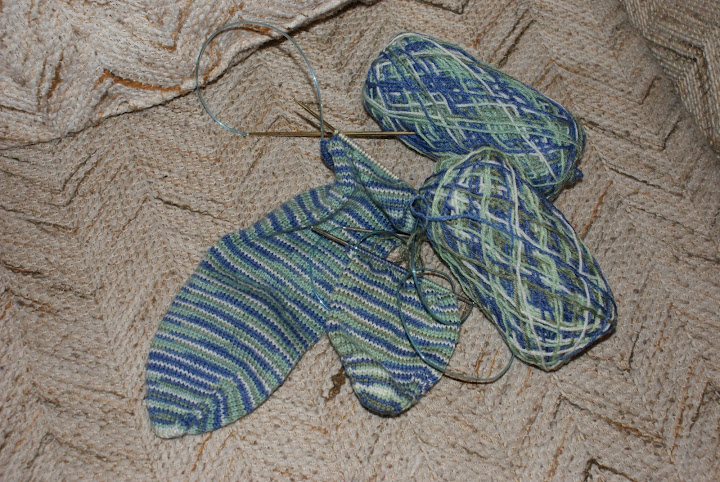 -The leftovers from March’s socks, which will become a coordinating pair, 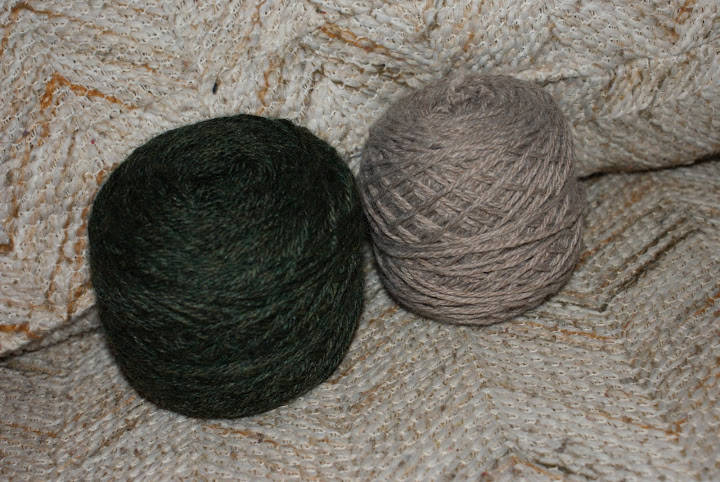 -The makings of a teddy bear sweater – they didn’t get to the point of having ball bands removed, but I feel really bad for not having started this, so I put it in with the active things – 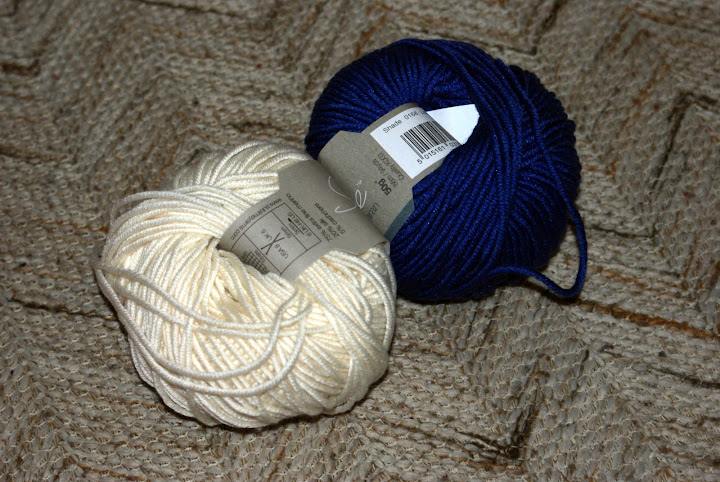 -The leftovers from my Lenten Scarf, which were spastically trying to become a leftovers project (they still will, it’ll just be a little later than I’d hoped), 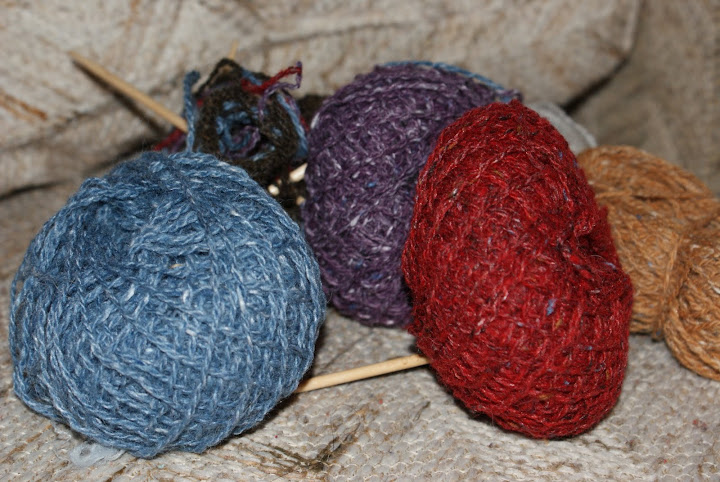 -The unspeakably beautiful In Dreams shawl, stalled 2/3s through clue #3, 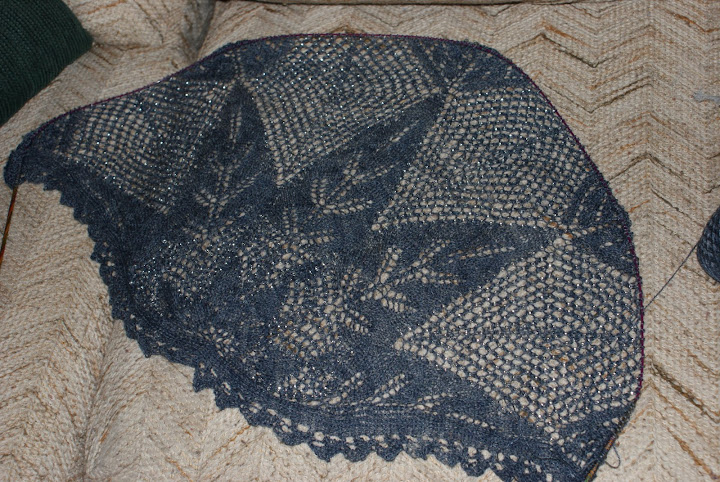 -And my Fair Isle Sweater of Doom, which saw nearly a whole main pattern repeat finished in between Feb. and March’s socks. 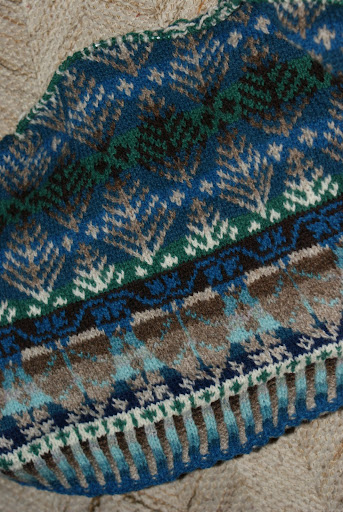 (A couple notable things are not going into the box – The Brown Bat (February Lady Sweater) and March’s socks are both finished, not without considerable effort, but they deserve their own days in the sun.)

Why do I show you all these pictures?

This Lenten exercise is sure to bring up all sorts of insecurities (not all of which I will dump on you, fair readers), and the first one came out as I contemplated the Big Sad Box. I realized that I leave projects out so that I don’t forget them. I really like to finish my knitting projects, which goes against my basically flighty nature, so keeping them out in the open (or at least not too deeply buried) makes me feel as if I haven’t given up on them. So putting them in a box and putting them away on the top shelf of the little closet in the back room makes me a little scared. What will happen? (a) I didn’t realize there were so many! (b) What if at the end of Lent, I can’t bring myself to care about them? What if it turns out that knitting is for me such an endless pursuit of consumptive novelty that these poor dears will be dead to me by the end of April? (c) What if (God forbid) my priorities straighten out and I get over my need to finish everything? My poor babies! They will be doomed!

So posting them all on here is a little way to shout frantically to the universe, or maybe just to myself, “These projects are still here! I’m not giving up on them or forgetting them! It’s just a Lent thing! I’ll pick them back up! I’m still not flighty! Stop looking at me like that!!”

I’ve never before seen how Mardi Gras and Ash Wednesday are connected – they seem like opposites. Party as hard as you can to get it all out before the second most penitent day of the year. But Mardi Gras, like any good Christian feast, is about the spiritual discipline of Celebration. And it is intimately connected to the following day, because when they party’s over, those little luxuries are used up or put away. And it’s that action – the putting away – from which we turn to face Lent, and face ourselves and God with honesty. 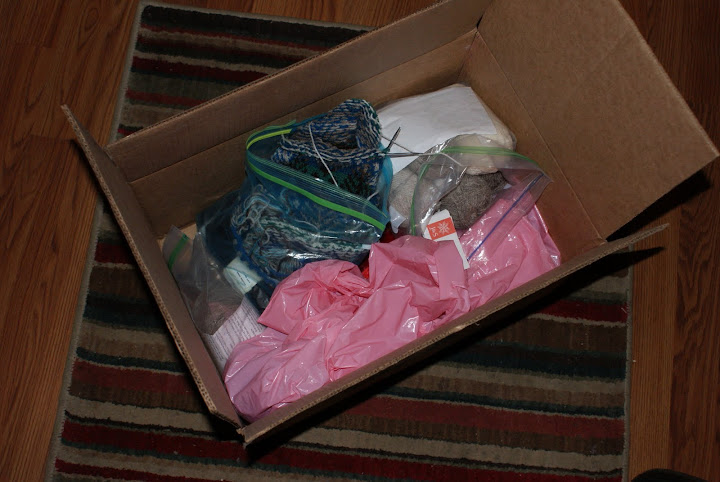 One thought on “Shriven”