Sorry about the interruption there, friends. I’m not sure what happened; there was some breaking of websites with scary numbers like “503,” some words bandied about by my husband like “did you SSH in and check the logs?” as if I knew what that could possibly mean. Anyway, the Masters of the Zeros and Ones over at Dreamhost rebooted a thing, and now we’re back in business. Now on top of everything else, my user interface has been changed again, and there is not a convenient way to make my pictures a reasonable size. So they are now going to be a little small; sorry dear. I think you can probably click on them to make them bigger.

All this prevented me from blogging over the last week, which is probably for the best, because this is where my life has been spent:

My giant final paper on “The Christian and the Locavore” has rather taken over my life. It’s fitting that the top middle book there is Being Consumed (really good little book by William Cavanaugh, by the way); that’s what I’ve been by this research. It’s fun, it’s taken over my brain, my sleep has suffered, and I can’t wait for it to be over. Which it soon will; my working draft just needs a little more work.

There hasn’t been much time for knitting in all this, as all that skimming, note taking, and typing don’t really leave the hands free to hold needles.

But that hasn’t stopped me from contracting a rather nasty case of startitis. That is, the inflammation of new projects.

After finally finishing Weathertop, which was a bit of a slog, the need to start new things hit me like a train. Within a few days I had started the next Lord of the Rings project (a shawlette thingie called “Legolas“),

knit the first strip of the Building in Color blanket (I’m teaching this as a class at Yarns Unlimited; it’s good fun. More on that another day),

In a moment of weakness, I cast on April’s socks, then promptly thrust them into a bag and ignored them,

I wound up yarn for a summer hat for Martha, as it is getting warm and wool/cashmere blends will only be useful for so long,

and I got some punis spun onto my drop spindle.

We won’t even talk about the All the Shades of Truth I’ve been pounding away on in secret for nearly a year. Or the immense spinning project that I pick away at for a few minutes a day.

And I don’t really know how this happened, but a front and a half of a baby sweater appeared in front of me in shocking rainbow acrylic. It was probably elves. Or aliens.

This is what my helpful little child had to say about that. 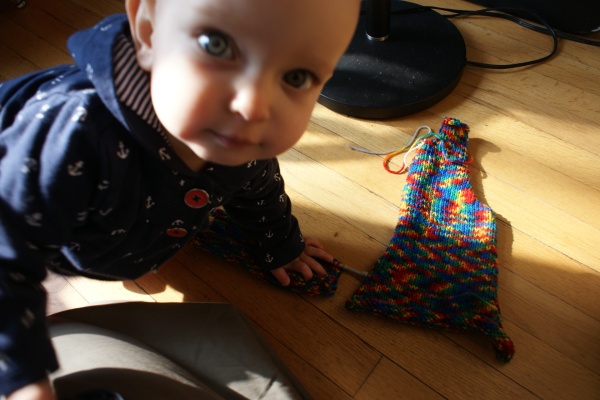 My paper is due on Monday. I’m going to take a week off to try to get this under control.

Though… don’t you think finishing work for a Masters’ degree deserves a good reward project? Maybe I’ll start a new sweater instead…

2 thoughts on “Senioritis and Startitis”