When I worked at Cloverhill, a co-worker told me about a Christmas tradition she had with her kids. Every year, they picked three things to give away, and they received three presents. (Three for the wise men.) This struck me as eminently reasonable. Not everyone has to do it, of course, and some rule like that isn’t going to automatically take the consumerism and greed out of Christmas for your children. But it’s a tool, among many others, that can be used to teach and add meaning.

Naomi’s a little young to pick things herself to give away. Everything (clothes, toys, tools, etc.) with her is in rotation anyway, and much of it is borrowed or will be handed down to another child in the community. But we did decide to give her just three gifts.

But we cheated a little.

Gift #1 is a set – a set of ten knitted balls, that is. Ten because that’s how many little bells I had on hand.

Aaaand I didn’t exactly finish on time. This is what her gift looked like when she opened it.

Yeeaaaah… taking advantage of the fact that she’s not really old enough to be disappointed yet. She really enjoyed the foil paper the bag was stuffed with for about ten seconds, then went back to chewing on Bethany’s old toothbrush. (ew.)

Throughout Christmas week, I plugged away at the little shells that would become this gift. The yarn is our own Meritime – white alternated with (clockwise): Sprout Sage, Raspberry Rouge, Golden Delicious, Magentastic, Mystic Mauve, Peach Orchard, Winter Sky, and Nectar. 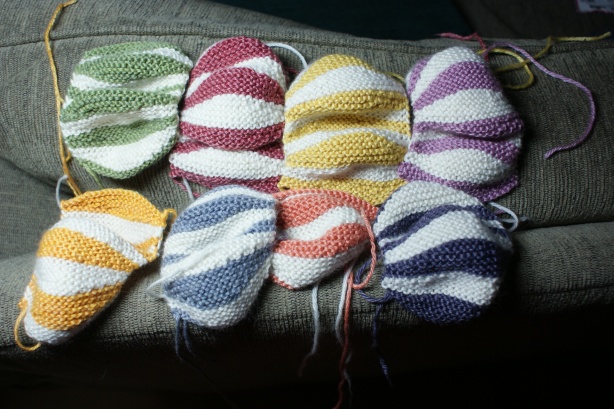 Lest you think I can’t count, there were two more. Wonder of wonders, they were finished for Christmas! The collection was completed with two tiny footballs:

When Naomi gets tired of playing with them, they’ll become her ornaments for this year – commemorating all the Sundays we spent over at Mother Tina’s house watching the Steelers. And I couldn’t give her a Steelers’ colored one without a Redskins one to accompany it… she will have to decide for herself which she likes better. (So long as she doesn’t, like, ask for a Ravens-colored one someday.

Anyway, back to the little striped balls. I finished the final one, and stuffed and sewed them up on New Years’ Eve. I was exhausted from a long week, so Jared went out and partied while I stayed home, finished little balls, watched Hunt for Red October, and went to bed. If you are supposed to ring in the new year doing what you want to do for the rest of it, I call that Not Too Shabby. And the results were on the floor to greet my little girl on the first morning of 2014.

Can you see the kick in motion? I think she likes them. The effect of a single jingle bell in each, I have to say, is rather underwhelming. Probably the fact that the single jingle bell is couched in a thick layer of stuffing does not help. Oh well! They are still cute and fun to kick. And who doesn’t love a little rainbow of little knitted beach balls?

The patterns were, respectively, the 10-Stripe Baby Ball and Baby’s First Football. They are of very similar constructions, being designed by the same person, and are free. I chose them because I really really really wanted to knit them flat. The idea of fussing with a bunch of DPNs ten times made me want to swallow the DPNs instead. I don’t know why; I’m just fickle that way. The instructions were clear and simple; it took me about an hour to knit each ball.

[edited to change the first link above – it should now be more direct. Getting to the actual pattern from ravelry is very circuitous!] 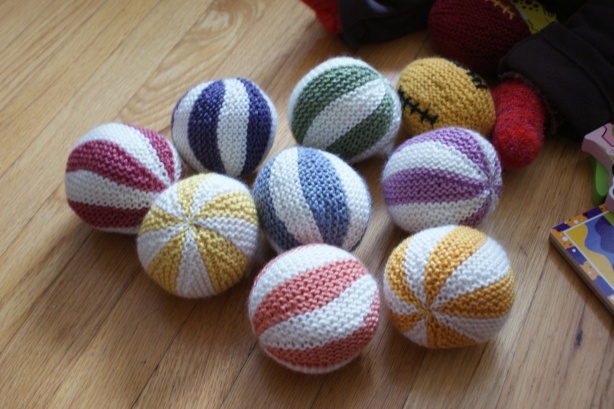 And how did the decision to knit little balls happen in the first place? … I am not really sure. I think it evolved from looking through a list of fun activities with a 10 month old, and seeing one idea for chasing a rolling ball. But one thing is for sure – Naomi knew just what to do with them! I’m hoping these will be her ammunition of choice when she learns how to throw…