Give God all praise and glory;

Let all who know his power proclaim

Cast each false idol from its throne,

The Lord is God, and he alone;

To God all praise and glory.

-The following is excerpted from an essay on The Drama of Scripture by classmate D. Scott Jessel. Scott also elected to do a creative project to represent that Drama – a large reproduction of the Ebenezer Stone. What follows is his explanation for why a physical representation of that story is so powerful. I think, given our project, his words will resonate for you as they did for me. Thanks Scott! ~Reb.

The book The Drama of Scripture surveys much of Biblical history, and does it well. It tells the whole story, the BIG PICTURE, thus the problem as I saw it was, simply put: How does one summarily tell the whole story of all that God has done? The wondrous deeds of God…How can they be summed up?

I admired the scope and inspiration of Chris Harrison’s Visual Bible, whose algorithmic interpolation of his immense database represents all the cross-referenced interconnections found in Scripture. So, I thought (and prayed) instead, of how to ‘draw’ one broad stroke adequately representing the principal features of how the one, true, holy God was continuously accomplishing His purpose, despite humanity’s fatal rebellion and compulsion—wafting throughout history like an insipid subtext—to disobey, ignore and forget The Story of God’s wondrous deeds. a perspective of significance, the cross (along with the empty tomb) certainly seemed a relevant focal point:

For the Jews, ‘crucified Messiah’ was an oxymoron. The cross as God’s mighty act was a skandalon – a scandal – a stumbling block. Yet the early church makes the bold and fantastic claim that the cross is the central act of God in all of human history!

Yes, indeed! The cross itself stood in reality—not just as a symbol; planted firmly in the ground outside the city of Jerusalem at Golgotha. It did not hang in the ‘air’ as some metaphorical idea, but rose from the rocky, hard foundation of the earth, even while a symbolic witness and fulfillment to all the wondrous deeds God had done, and would continue to do for Israel, and subsequently all believers, for all of eternity. The Story has always pointed towards the cross (the cross precedes everything in liturgical worship)! Yet, “What the world needs now is…[not another art installation of the Cross].”

A brief digression: A dear friend of my parents, whom I will call Bethany, had a vision for starting a Christian day-care center, and was inspired to do so, with God’s help. Although never having attempted such an endeavor before, what she hoped to accomplish was neither absurd in respect to her abilities, nor unlikely merely because of the inevitable naïveté arising from the lack of experience. There did exist, however, a number of very difficult obstacles—not the least of which was financial. As might be expected, through the process of realizing her vision, Bethany constantly faced the temptation towards despair in every attempt to overcoming those challenging circumstances. So—in prayer, hope and humility—she brought these challenges before the LORD with faith, knowing Him to be source of her life. Often things worked out in a manner that she imagined—sometimes not; some things worked out joyfully, other things did not, and sometimes she still became discouraged. What Bethany decided might help in dealing with the pitfalls, trials and snares was a counter to the discouragement, before it could defeat the vision—in the form of: the marble jar. Every time God answered one of her prayers (with yes, a no, or even not yet) Bethany put a marble into a large, clear jar. As time went on, one marble became two; two became ten; and ten turned into a hundred. The jar filled up so much that at one point, Bethany turned in spite of her natural doubts, and said, “This is happening…God is faithful”; not just in fulfilling her limited vision of what He was accomplishing—although it did eventually become a reality—but on the promises of His character. God is faithful to who and what He is, always! Hitherto, the LORD has helped us. There is a symbol, like this, that had great significance for Israel in its struggles against discouragement, complacency, fear, and failing to acknowledge the awesome remembrance of all the LORD did (and is still doing) which could be used to illustrate the main features of The Drama of HIS-story in a parish today: the Ebenezer stone.

It is the need for remembrance that is so crucial in our journey. Everyone gets discouraged, but believers often have some experience to share, something that can announce the wondrous deeds of God.

For Further Reading: To read the original story of the “Ebenezer Stone” in Scripture, read I Samuel 7:3-17. Sometimes it is so powerful to set up a reminder of a time that God helped you – and no rules say such a reminder can’t be knitted. 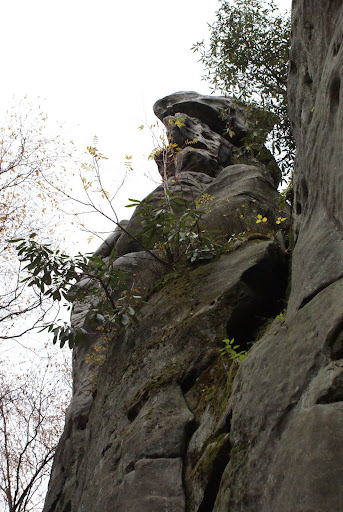